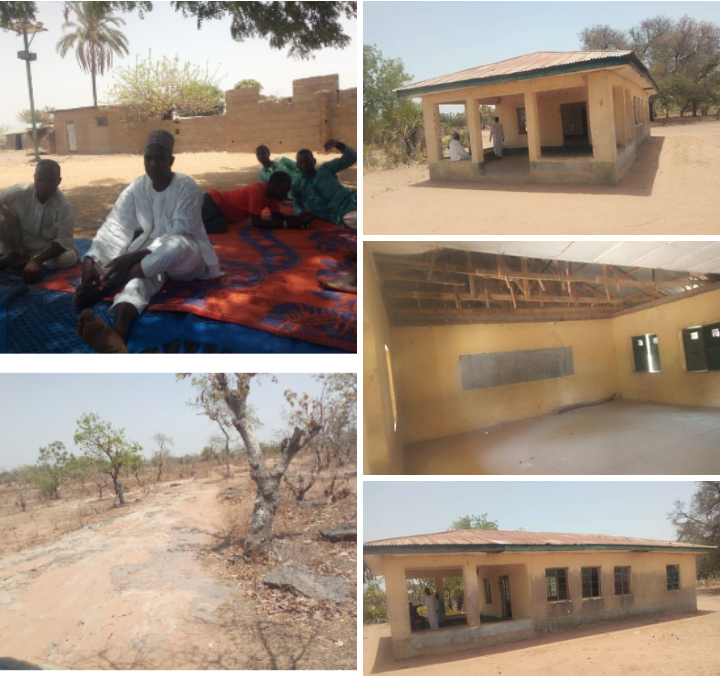 * But for Binani’s borehole, water would have been a hygienic problem

Bormuis the village of our spotlight this week. It is a story of dejection, rejection, neglect, abandonment and alienation; passing through a narrow, though, rough and famished road to get to the farming community. Mohammed Ismail was among the crew. The following is his report on the remote village in Yola South local government area of Adamawa state denied of social amenities among other dividends of democracy promised during campaigns.

The distance of Bomu village from Jimeta, the administrative headquarters of Yola, the Adamawa State capital is just 15km. But it takes hours of hard driving to connect to the village courtesy of the bad road and difficult terrain.

The driver of our vehicle, a Toyota SUV, has shown tremendous dexterity maneuvering through tough, rough and narrow road; some of the gaping gullies and craters, which dotted the landscape. 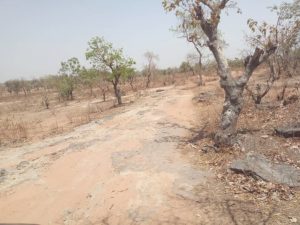 Sometimes the driver has to negotiate dangerously between trees or rocks in search of a relatively better to enable us continue with the rough journey, making the trip both exhilarating and nervous.

Our guide, Doctor Sani Zubairu told us that we’re lucky to embark on the journey in the month of April when the land is dry and hard, adding that if it were in August, it would have been difficult to accomplish it or we might spend days on it.

At a point during the “brutal trip”, we stumbled on a tree trunk while trying to meander through two closely positioned trees making the bumper of the vehicle to instantly snap from the hood, which took us sometimes to fix as the merciless Yola heat waves descended on us. Coupled with that was the anxiety that the men of the underworld who could have better knowledge of the terrain might strike at any point in time.

But somehow, we managed to fix the vehicle and arrived at our destination safely.

Luckily for us, we met a group of elders whiling away time under the shade of a tree and upon enquiry they announced our presence to the village head (Maijimilla) a humble and level headed, middle aged man who treated us with respect and dignity. 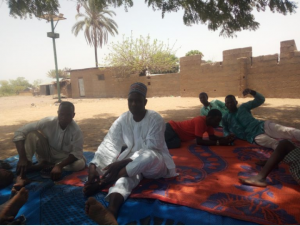 The village head Dauda Bobbo (Maijimillan Bomu) who was full of life and humour revealed to us that the village, being occupied by over 4,000 people was build since the era of Lamido Sanda about 150 years ago.

Bobbo said that Bormu remained one of the few communities fortified with walls, called “Ganuwa” in Hausa language; “a defensive mechanism used during wars to fend off attackers”.

Bobbo however lamented that despite being in existence for a long time, Bomu has nothing to show for its longevity; it is summarily abandoned, with nothing to show as dividend of democracy, no contact at all with modernity, the only thing left there for consolation is the spiritual sensibility, a morality tied to religion.

“Although we have myriad of challenges, our biggest nightmare is dearth of road. This is one of the most viable communities in terms of agricultural output as we are known as the food basket of Yola South, but lack of access road is a serious set back on our quest to feed our local government and by extension our state.

“We find it very difficult to transport our products outside and even to ferry farm implements to our village to improve our harvest. Successive administrations have made promises to construct this road but it remains a mirage.

“The last administration in the state started clearing the road but it did not return to complete the project.

“We are humbly and respectfully calling on the incumbent administration to assist us in this direction,” Bobbo said.

The village head noted that after road, the next most important requirement is electricity. He said the Bomu would require electricity to process agricultural products, it would also improve the livelihood of the inhabitants of the area.

“Our next priority after road is to have electricity. It will come handy to us because we need electricity to process and even preserve the massive agricultural produce we generate. Even the socioeconomic livelihood of our people will improve tremendously if we get this important infrastructure,” he said.

While appealing to the government to come to the rescue of the only clinic in the area, Bobbo said the clinic which was constructed during governor Abubakar Barde’s administration, more than four decades ago has been abandoned with no staff and equipment.

“Our clinic was constructed during the administration of Abubakar Barde but since then, no staff or equipment were brought. We face grave difficulties taking our pregnant women or critically I’ll persons to hospitals especially during rainy season. 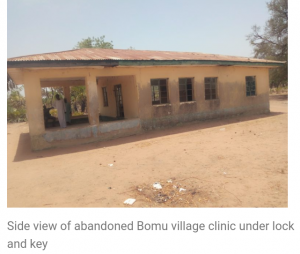 “We want the government to rehabilitate, and equip the clinic with staff so that our people, who are mostly peasant farmers can have some succour and reprieve,” he said.

A visit to the clinic revealed a worn out structure reduced to shambles by whether, longevity and neglect. It was also under lock and key without any form of equipment or staff present.

According to Maijimilla, the clinic, has been reeling under such neglect since it was build and never served the purpose for which it was built.

Similarly a visit to the only primary school in the area revealed no activity as no any teacher was seen.

On enquiry, we were told that even the headmaster was not living in the village and teachers were not coming to teach due to the myriad of challenges facing the village. 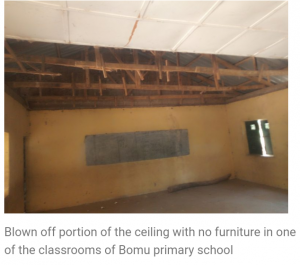 The Bomu primary school, a one block of two classroom structure which wore a sharp contrast with the clinic is itself a subject of neglect and abandonment.

Like the clinic, it has no furniture or any working facility. The roof of the school was partly blown off signalling that even if there are teachers and working materials, learning can’t take place during the rainy season.