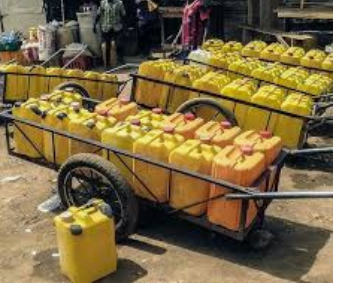 Water could lead a sinner to paradise as it led a prostitute who rescued a thirsty dog from dying.

In Yola ancient city, Adamawa state, among other places under investigation, paradise could be far from being attained by prostitute as an analogy who is forced into commercial sex service simply to earn a living, if providing water to a thirsty dying dog could be a barrier because of the growing amount rather unaffordable amount.

Water vendors are having the exploitative commercial field day, selling a cart of twelve plastic jerricans between N400 to N500 in starlight, Bako – Kasuwan ciyawa and Mbamoi among other wards in the ancient city.

The people the Periscope interviewed, lamented that “it is unfortunate that water is life but the government is reducing the poor to being lifeless for depriving them of the most essential amenity; the tap water.

“How much will it cost to service the state water treatment plant? Far less than seven billion naira sourced for overhead bridge in the state capital.

“The story is different with Gombe state, clearly the Jewel in the Savannah where water treatment plant that provides water for Gombe town is in Dadin Kowa, where a Dam is built.

“Dadin Kowa Dam is in Yamaltu local government area of the state, located about 35 kilometres to the east of Gombe town, and provides drinking water for the town.

“River Benue, where the water treatment plant is located in Adamawa state is a stone’s throw, yet houses lack water in Yola.

“The last time we enjoyed tap water was during the amiable Admiral Murtala Hammanyero Nyako led administration we honoured with admiration.

“If there’s anything political will, the government would only need to do a new plastic piping and forget the more than 5 decades old metal pipes rusted to the ground.

“So many boreholes, we are made to understand, could cost earthquake. It is not even everywhere that boreholes could be drilled in Yola to get drinking water.

“There’s more than enough water passing through River Benue to be supplied to Adamawa state with political will, because some water vendors could even supply water from unhygienic sources, prone to typhoid fever and other infectious diseases”.

Other residents interviewed have called on the traditional authority and relevant government agencies in Yola to find solution to the growing amount of money per cart of twelve jerricans that has become unaffordable.

Adamawa needs water not only for the thirsty dog but even the prostitute to be kept alive.