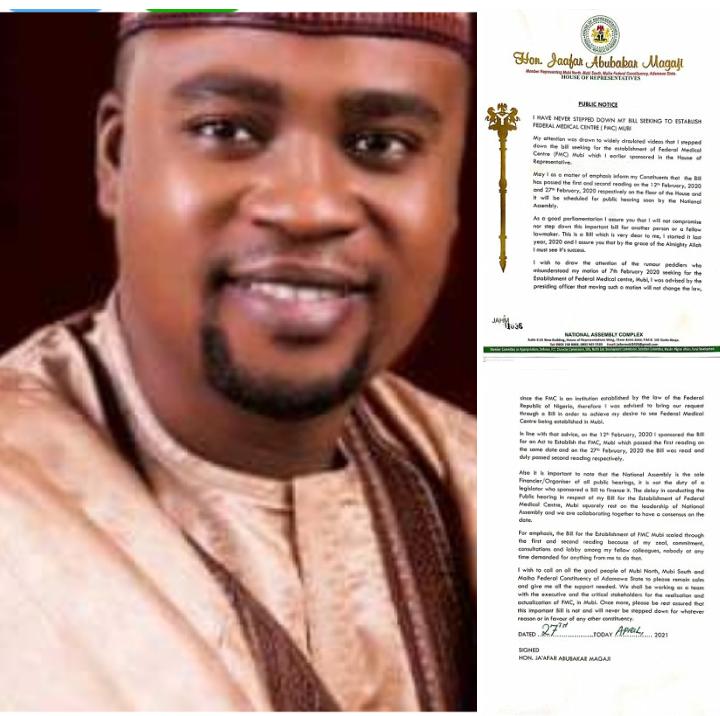 * The Bill is scheduled for public hearing anytime soon

* Solicits for usual support and cooperation from the constituents

The Honourable Member representing Mubi North, Mubi South and Maiha Federal Constituency in the 9th National Assembly, Hon Ja’afar Abubakar Magaji has debunked the viral video report that he has stepped down the bill he sponsored on the establishment of Federal Medical Centre in Mubi, Northern Senatorial District of Adamawa state, northeast Nigeria, following the move for the upgrading Federal Medical Centre, FMC Yola to a teaching hospital.

The viral video is diversionary, misleading and malicious, calculated for campaign of calumny. The conspiracy is not only malnourished of critical thinking, it is also criminally unintelligible that a Bill, which according to the lawmaker, “passed the first and second readings on the 12th February, 2020 and 27th February, 2020 respectively on the floor of the House and will be scheduled for public hearing soon by the National Assembly,” could, be withdrawn, suspended and/or stepped down by the sponsor.

The lawmaker, in a public notice he personally signed on Tuesday, April 27, 2021 and made available to the Periscope, affirmed that he firmly stood by his constituents that he would never consider betraying to compromise that which would be of tremendous benefit to them.

Jafar has called on his constituents to ignore the viral video and continue to give him the maximum support he enjoyed, especially when it comes to public hearing on the FMC Bill to be scheduled anytime soon.

Below is the full text of Hon. Jafar’s public notice:

My attention was drawn to widely circulated videos that I stepped down the bill seeking for the establishment of Federal Medical Centre (FMC) Mubi which I earlier sponsored in the House of Representative.

May I as a matter of emphasis inform my Constituents that the Bill has passed the first and second reading on the 12th February, 2020 and 27th February, 2020 respectively on the floor of the House and it will be scheduled for public hearing soon by the National Assembly.

As a good parliamentarian I assure you that I will not compromise nor step down this important bill for another person or a fellow lawmaker. This is a Bill which is very dear to me, I started it last year, 2020 and I assure you that by the grace of the Almighty Allah I must see it’s success.

I wish to draw the attention of the rumour peddlers who misunderstood my motion of 7th February 2020 seeking for the Establishment of Federal Medical centre, Mubi, I was advised by the presiding officer that moving such a motion will not change the law, since the FMC is an institution established by the law of the Federal Republic of Nigeria, therefore I was advised to bring our request through a Bill in order to achieve my desire to see Federal Medical Centre being established in Mubi.

In line with that advice, on the 12th February, 2020 I sponsored the Bill for an Act to Establish the FMC, Mubi which passed the first reading on the same date and on the 27th February, 2020 the Bill was read and duly passed second reading respectively.

Also it is important to note that the National Assembly is the sole Financier/Organiser of all public hearings, it is not the duty of a legislator who sponsored a Bill to finance it. The delay in conducting the Public hearing in respect of my Bill for the Establishment of Federal Medical Centre, Mubi squarely rest on the leadership of National Assembly and we are collaborating together to have a consensus on the date.

For emphasis, the Bill for the Establishment of FMC Mubi scaled through the first and second reading because of my zeal, commitment, consultations and lobby among my fellow colleagues, nobody at any time demanded for anything from me to do that.

I wish to call on all the good people of Mubi North, Mubi South and Maiha Federal Constituency of Adamawa State to please remain calm and give me all the support needed. We shall be working as a team with the executive and the critical stakeholders for the realisation and actualization of FMC, in Mubi. Once more, please be rest assured that this important Bill is not and will never be stepped down for whatever reason or in favour of any other constituency.