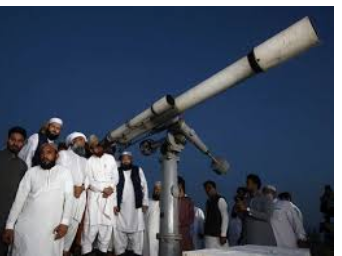 To declare the beginning of Ramadhan, Saudi Arabia and other Muslim-majority countries depend on the testimonies of local moon sighters.

Those who sight the moon do not go to the press or announce it publicly, they report to the Islamic Ieadership of the country through the council of scholars responsible for gathering information relating to the moon sighting for authentication.

It is the responsibility of the Islamic Ieadership, having received authentic information for the council of scholars, to announce the beginning or the end of the Ramadhan fasting.

Breaking the orthodoc rather traditional eyes-searching for the moon, Saudi Arabia has for the first time, announced the date of the Islamic calendar using astronomic technology rather than the traditional visual sighting of the moon.

Sheikh Abdullah Bin Suleiman Al Manea, member of the Saudi Council of Senior Scholars and adviser at the Royal Court, has on Monday, May 3, 2021, said that month Ramadhan would be 30 days this year, as reported by Al Shorouq Online.

This development has suggested that Eid Al-Fitr will be observed on Thursday, May 13, according to astronomical calculations.

However, Al Manea still called on those who seek to observe the end of Ramadhan by sighting the new moon to continue to do so.

Saudi marked the start of Ramadan on 13 April. Both the start and end of the Muslim holy month are decided by the sighting of the new moon, which determines if it is 29 or 30 days long.

Lunar months last between 29 and 30 days, depending on the sighting of the new moon on the 29th night of each month. If the new moon is not visible, the month lasts 30 days.

Al-Jazeera reports that Bahrain, Egypt, Kuwait, Oman, Qatar and the United Arab Emirates are all expected to follow Saudi Arabia’s sighting of the new moon.

Other countries have independent sightings, but for unification most governments and Islamic Ieadership in Africa are also likely to join Saudi Arabia declaration.