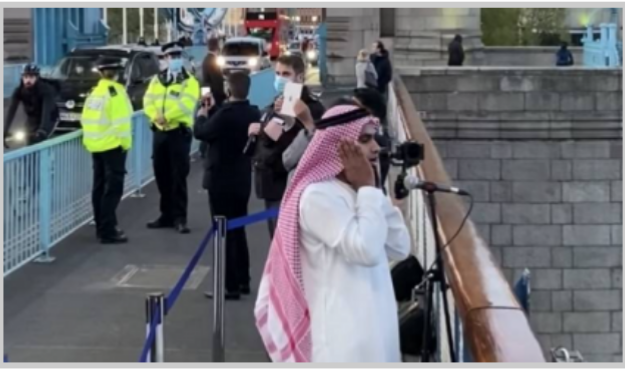 Just as the sun set over the horizon on the last Friday of Ramadan, a British-Muslim delivered the adhan on London’s Tower Bridge to mark the end of an interfaith Iftar gathering.

35-year old London-based muezzin, British-Bangladeshi Kazi Shafiqur Rahman who was part of an interfaith virtual iftar on Friday, delivered the adhan in a style akin to Sheikh Ali Ahmad Mulla, head muezzin of the Grand Mosque in Makkah, which echoed throughout mosques and events in the English capital.

“Concluding the Friday’s Iftar meeting, Rahman performed the Adhan using a microphone at the center of London’s Tower Bridge, sending his Mecca-inspired call to prayer ringing through the heart of the metropolis” a reporter revealed.

“I am just an ordinary individual and for me to be blessed with such an opportunity is humbling,” Rahman commented. He added that “the call to prayer is such a strong message and that I was sending it out across the world via social media.”

In 2020, Rahman performed the Adhan in London’s Canary Wharf, in the heart of the city’s financial district. The response Rahman received via social media inspired him to continue his public performances. “The impact of last year’s adhan was just unbelievable, the video reached millions of viewers,” Rahman said.

He was asked to again perform his skills this year, to mark the conclusion of an interfaith meeting organized by real estate firm Tower Hamlets Homes and the East London Mosque.

The organizations met on Friday for its Tower Hamlets Interfaith Forum, which brought together local residents of various faiths. The event aimed to “facilitate better communication and understanding between the different faiths,” in the London neighborhood, calling the effort a “vital one” amid the current “international climate.”