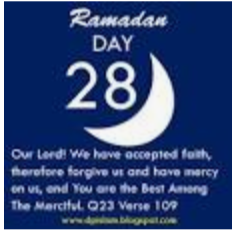 Month Ramadhan is coming to an end; worship places, centres and schools are closing their Qur’anic exegesis – tafsir – till another Ramadhan; in preparation for Eid El-Fitr.

Ramadhan is a sacred month in which the noble Qur’an was revealed and prayers, especially of the marginalised, shortchanged, exploited and oppressed are readily answered.

Not only intensive recitation, understanding the Qur’an is paramount in the month of Ramadhan, giving as reason for the Qur’anic exegesis.

Tafsir was introduced some decades ago at Jalingo-Maiha central mosque by the late district head, the Ubandoma Mubi of blessed memory. It continued even after his death over seven years ago.

Every year, every Ramadhan, every tafsir, the mufassir – scholar – would pray for Jannatul Firdaus to the district head and the blessings for his family to also bear the irreparable loss.

The mufassir, having noted the constraints associated with godfathering, would always emphasise on God the Lord and Creator only, to be relied on.

He would pray against hypocrisy, complicity to and conspiracy machinated by the ardent, rather unrepentant anarchists to disfigure history and murder monarchical order by any means tribal sentiment.

He would pray that the legitimate heirs – not alien – should take over the leadership responsibility.

There are indications that the Just and the Most Merciful has answered the Prayers, by humiliating the god’s son to the godfathers before the law.

Ramadhan tafsir will close tomorrow, Tuesday, May 11, 2021 in Jalingo-Maiha, the mufassir and indeed the Ummah entity would have loved to have the district head chairing the noble and holy event. However, there has been a prolonged executive delay in honouring courts orders to have the approval of appointment of the legitimate legitimate district head over seven months after the Appeal Court judgement.

The sage would argue that the acting district head ought to have retire back to Mubi the day the Appeal Court passed her judgement, affirming the High Court judgement, after he must have handed over the leadership to the deserved, rather peacefully.

“One of the most significant things to be missed tomorrow at the closing of the 2021 Ramadhan tafsir is the Emirate Council’s selected, recommended and the courts declared district head of Jalingo-Maiha.

“It will appear that we will observe Eid El-Fitr without our district head. It’s unfortunate,” concerned youths would lament.

Ramadhan fasting enters day 28; even though tafsir closes tomorrow, Qunut prayers continue until the Most Merciful deals with injustice.

“It is no more place for acting, it is time for our district head to be appointed,” concerned youths would say.