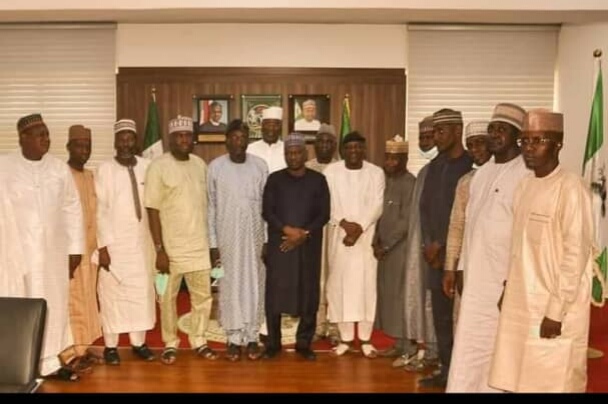 Last week, the seeming surreptitious move by the Adamawa lawmakers with the state assembly – excluding a lone, considered as uncompromising radical – to hearken to the governor’s request, to, on behalf of the indigenes who entrusted to them the mandate for a selfless and productive rather than mortgaged representation, was hacked by the teeming seeming unsatisfied stakeholders following media reports.

Newsmen, as was earlier reported, were barred from serving as witnesses to the singing of the N100b loan! bond! by the security agencies manning the state House of assembly, said to be merely acting on the legislative directives.

The critical minded stakeholders could not conjure up the rationale behind what they considered as bogus, unlawful transaction entered rather hastily with a lone consulting firm without wide consultations to have had the views of the indigenes, whether or not it would be worthy submitting to such financial risk – at this terrible financial time – capable of being claimed by famine; fraud, draught, flood, windstorm and livestock epidemic among other uncontrolled circumstances that could send the state into the deep coffin of debts to death, without anyone owning up to the responsibility rather than blaming it to the “will of God”.

The Governor who earlier lamented that the financial resources of the state were claimed by the one hundred and fifteen billion naira inherited from the past governments has in less than two years of his tenure collected a loan of more than thirty billion naira, the stakeholders were curious and furious, seeking to know what genuinely happened to the money loaned.

With the loan! bond! of N100 billion it would mean that the Fintiri led government has casted for outside financial services of over N130 billion in less than two years of his first tenure. More than N115 billion loan mounted over a period of twenty years.

Joining Hon. Abdullah Umar Yapak’s position – the lone considered uncompromising radical state legislator who backed out, refusing to dance to the executive tune – the critical thinking stakeholders are agreed that the ceiling for the loan in the year 2021 is twenty billion naira, why sourcing for one hundred billion naira of either loan or bond?

“Loan or Bond, what is binding is whether or not both attract interest,” the stakeholders would argue.

Senior Special Adviser on New Media to the Governor, Muhammad Bakari Tukur tried to point out the position of the government and the impact the N100 billion bond, not bogus loan attracting bullion of interest would have on the economy of the state and the social welfare of the citizenry.

Contrary to the negative perception, the SSA articulated, the N100 billion bond formed part of the measures the state government deployed to improve her Internally Generated Revenue (IGR) through Agribusiness.

Below is the full text of the SSA’s script:

It’s become imperative to clear the air, the doubts, and the hullabaloo that surrounded the 100 billion naira bond approved by the Adamawa State House of Assembly as part of measures to improve Internally Generated Revenue (IGR) through Agribusiness.

A bond is a fixed income instrument that provide funds for projects. A bond could be thought of as an I.O.U. between the lender and borrower that includes the details of payments.

Bonds are used by companies, municipalities, states, and sovereign governments to finance projects and operations. Owners of bonds are debt holders, or creditors, of the issuer. Bond details include the end date when the principal of the loan is due to be paid to the bond owner and it usually includes the terms for variable or fixed interest payments made by the borrower.

Let’s look at the benefits of this bond. In the face of dwindling economic resources in the country, the Adamawa State Government has deemed it necessary to prioritize Agribusiness to boost its IGR through the services of a consultant, Arewa Research and Development Project.

The Government came up with a programme tagged “Adamawa State Agribusiness Support Programme” (ADAS) designed to take full advantage of the agricultural opportunities within the state and will focus on three areas of Crop Value chain, Livestock and Acquaculture.

What Adamawa state stands to reap include Increase in the annual IGR from 8.3b on inception to 45b by the tenth year, return of the warehoused 5.15b credit Guarantee fund and Increase in Gross Domestic Product GDP from 1.7 b to 7.8 trillion among others.

In his presentation, the leader of the team Arewa Research and Development Project Aminu Buhari said the programme will provide Credit Guarantee Scheme of 5.15 billion that will be used to generate additional IGR of 2.4b in the first year of operations.

He added that it will also upgrade some selected grains and cattle markets in Mubi, Ganye, Song, Gombi, Ngurore, Tungo, Malabu, and Wuro bokki adding that it will drive socioeconomic benefits in the areas of employment generation, poverty reduction, wealth creation and improved security.

The programme will also improve economic fortunes of the state by creating one stop program that will focus on Agribusiness over a ten year period, creating and institutionalising market and their associate infrastructure reforms and attracting investment in the key sectors of the economy.

Besides, we need to understand that upon engagement of the firm by the government, it met with the ministries of Livestock and aquaculture, Agriculture, Finance and Budget, Planning Commission and Economic team of the state after which it completed all submissions and is awaiting approval to commence full implementation.

After looking at the benefits of Agricbusiness to Adamawa, the State Executive Council during its first meeting for 2021 has approved the issuance of one hundred billion naira bond for the Adamawa State Agric Business Support for the period of four years.

The Agric bond will draw twenty five billion naira annually which will be used to offset alot of state liability and loans, and open a window for generating a lot of revenue as well as galvanizing the market in the Agric business, especially the livestock subsector.

In addition, there will be establishment of Adamawa State Agric Business Support Programme, Five agencies and repositioning of the Agricultural Development Programme and Board of Internal Revenue.

The agencies include Agricultural Project Coordination Agency, Infrastructural Concession Agency, State Agricultural and Land Development Agency, and fine tuning the mandate of Adamawa Investment Company and to link it with the Investment Promotion Agency that will be established.

This is because, for sure, most of the state debts and liabilities were incurred by previous governments, hence the need for the present leadership in the state to tirelessly work to right the wrongs by engaging consultants in the field of Agricbusiness to salvage the state.

This Agric business plan has worked in Kaduna and other two states in the country which when implemented will generate seven hundred and fifty as well as one thousand five hundred both direct and indrect jobs across Adamawa.

Muhammad B. Tukur Gcfr
New Media aid to the Governor
12th May 2021