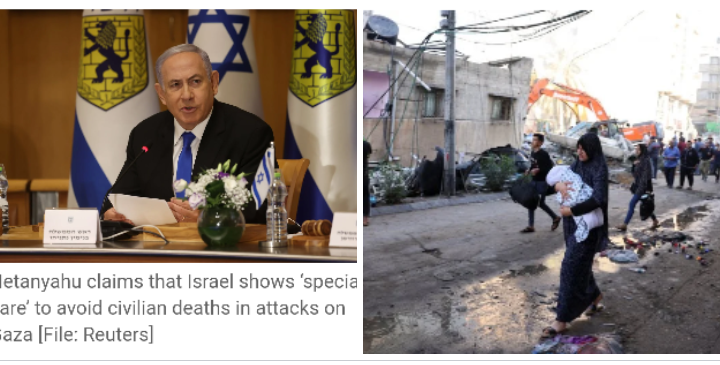 Several Palestinians killed in new wave of Israeli raids on Gaza as Benjamin Netanyahu vows to continue attacks ‘as long as necessary’.

The home of Gaza’s Hamas chief, Yehya al-Sinwar, was also targeted, according to the group’s media.

In Israel’s Tel Aviv, people dashed for bomb shelters as sirens warning of incoming rocket fire blared across the city.

More than 170 Palestinians, including at least 41 children, have been killed in the Gaza Strip in the past week. More than 1,000 others have been wounded. In the occupied West Bank, Israeli forces have killed at least 13 Palestinians.

The United Nations Security Council meets on Sunday to discuss the worst outbreak of violence in years in Palestine and Israel.

“In view of the ongoing escalation between Israel and Palestine and the unacceptable number of civilian casualties, I am convening an extraordinary VTC of the EU Foreign Ministers on Tuesday. We will coordinate and discuss how the EU can best contribute to end the current violence,” Josep Borrell wrote on Twitter Sunday.

‘Apartheid states are not democracies’

US Cogresswoman Alexandria Ocasio-Cortez slammed the administration President Joe Biden for not stading up to Israel, which she called an “apartheid state”.

“Apartheid states aren’t democracies,” she wrote in a tweet.

Sharing a video of the Israeli attack on the Al Jazeera and AP offices, she said: “This is happening with the support of the United States.

She added: “I don’t care how any spokesperson tries to spin this. The US vetoed the UN call for ceasefire. If the Biden admin can’t stand up to an ally, who can it stand up to? How can they credibly claim to stand for human rights?”

Hundreds of protesters shut down traffic as they took to the streets of Los Angeles, calling for an end to Israeli air strikes over the Gaza Strip.

The protesters waved flags and signs saying “free Palestine” and shouted “long live intifada,” or uprising. They marched from outside the federal building to the Israeli consulate in the western part of the city.

Chinese Foreign Minister Wang Yi called on the UN Security Council to seek a de-escalation of violence between Israel and Gaza’s Hamas rulers. He also blamed the US for the council’s lack of action so far.

“Regrettably, the council has so far failed to reach an agreement, with the United States standing on the opposite side of international justice,” the state-run Xinhua news agency quoted Wang as saying.

US Secretary of State Antony J Blinken spoke with Gary Pruitt, the President and CEO of the Associated Press on the Israelis military attack on the news agency’s offices in Gaza, his spokesman Ned Price said.

“The Secretary offered his unwavering support for independent journalists and media organizations around the world and noted the indispensability of their reporting in conflict zones,” Price said in a statement.

He also expressed relief that the Associated Press team on the ground in Gaza remains safe.

IDF: Media tower was Hamas base

The Israeli military called the office of media organisations it bombed on Saturday “an important base of operations for Hamas’ military intelligence”.

“The base gathered intel for attacks against Israel, manufactured weapons & positioned equipment to hamper IDF operations,” The ISraeli Defence Forces said in a tweet.

It added: “We warned civilians in the building about our strike out of concern for their safety & gave them enough time to safely evacuate. Hamas & Islamic Jihad used this time to take items out of the building. We were willing to pay that price to not harm any civilians.”

Thousands of pro-Palestinian supporters marched through New Zealand’s largest cities to protest against Israeli airstrikes on the Gaza Strip.

Hundreds of demonstrators protested in the capital Wellington, as well as in Auckland and Christchurch, holding signs, banners and Palestinian flags.

The marches coincided with Nakba Day, which commemorates the displacement of hundreds of thousands of Palestinians during the war for Israel’s independence in 1948.

Israel’s prime minister said that attacks on the Gaza Strip would continue as long as they were necessary.

Netanyahu also claimed that the tower, which housed offices of various media groups, including Al Jazeera and The Associated Press, was being used by Palestinian groups, including Hamas, before being destroyed by the Israeli army.

“Israel’s operations on Gaza will continue as long as needed to reach its aims,” he said at a news conference where he thanked US President Joe Biden for his support.

Canada stressed “the fundamental importance of protecting journalists” following the Israeli attack on a building housing international media in Gaza, and called for “immediate steps” to end the violence.

Foreign Minister Marc Garneau said Canada was following the situation in Israel, the West Bank and Gaza “with grave concern” and urged “all parties to take immediate steps to end the violence, deescalate tensions, protect all civilians, refugees, journalists and media workers.”

He reiterated on Twitter “the fundamental importance of protecting journalists,” stressing they “must be free to do their work,” adding: “Their safety and security must always be ensured.”

More than 450 people were wounded, the agency reported, with 100 injured from the use of live ammunition.

Palestinian demonstrators gather near Tubas in the occupied West Bank to protest over tension in Jerusalem and the Israel-Gaza escalation on May 15, 2021 [Raneen Sawafta/ Reuters]
6 hours ago (02:48 GMT)
Israeli raids damage road leading to Gaza’s main hospital

Israeli air raids created a crater that blocked one of the main roads leading to al-Shifa, the largest hospital in Gaza, the Associated Press news agency reported, citing residents and journalists.

The Palestinian Wafa news agency said the intensive shelling caused “massive destruction” in the Gaza Strip, including to civilian homes, and also resulted in a complete blackout in the northern Rimal neighbourhood.

US President Joe Biden spoke with Israeli Prime Minister Benjamin Netanyahu and reaffirmed his “strong support for Israel’s right to defend itself against rocket attacks from Hamas and other terrorist groups in Gaza”, the White House said.

He also spoke with Palestinian Authority President Abbas and “conveyed a commitment to strengthening the US-Palestinian partnership,” the White House added in a tweet.

Rescue workers pull out five children from rubble in Gaza

Al Jazeera’s Safwat al-Kahlout, reporting from Gaza, said rescue teams are racing to dig out survivors from beneath the rubble of residential buildings flattened in Israeli raids.

“The rescue teams have found five children alive,” he said. “They say they hear some people are still alive under the rubble and they’re still working to pull out more survivors.”

He said the Israeli bombardment had destroyed houses and roads in the El Wahda district.

American Muslims for Palestine, a US-based advocacy group, urged the Muslim community to boycott President Joe Biden’s Eid celebration on Sunday over his stance on Palestine.

“Recent statements made by President Biden, White House spokesperson Jen Psaki, and Department of State spokesperson, Ned Price, completely disregard the ethnic cleansing of Palestinians from East Jerusalem, the Israeli assault on Al-Aqsa on worshippers during Ramadan, and the ongoing siege of Gaza that has already claimed the lives of hundreds,” the advocacy group said.

“In a show of solidarity with our Palestinian brothers and sisters in Palestine, the United States, and around the world, a coalition of Muslims nationwide is urging our Muslim community to boycott the White House event and join the ‘Eid with Palestine: A Protest of the White House Eid event.”

Earlier, the Council on American-Islamic Relations also said it would boycott the White House’s Eid celebration.

Israel struck the home of a senior Hamas leader in a burst of air raids, the group’s TV station said.

Yehya al-Sinwar has headed the political and military wings of Hamas in Gaza since 2017.

Israel launches ‘most intensive air strikes’ yet in Gaza

Al Jazeera’s Safwat al-Kahlout, reporting live from Gaza, said Israeli jets carried out 150 air raids across the Gaza Strip in the early hours of Sunday, including at least 60 in Gaza City alone.

“The last couple of hours the Israeli army carried out the most intensive air strikes all over the Gaza Strip over the past seven days of escalation,” al-Kahlout said, adding that several people were killed in the raid.

Emergency workers are digging through the rubble in the hopes of finding survivors, he said.

The Gaza health ministry meanwhile said many Palestinians were arriving at hospitals with injuries.

At least nine people were wounded after soldiers opened live fire, and were taken to the hospital, WAFA said.

Huge crowds rally across US in support of Palestine

Al Jazeera’s John Hendren, reporting from Washington, DC, said there was an “unusually large show of support” for the Palestinian cause in the United States on Saturday.

“There were demonstrations in New York, Chicago, Colorado, and in Washington, DC. These were what we thought were an unusually large pro-Palestinian crowd of several thousand people,” he said.

“They wanted the US government to exert more pressure on Israel, to end this conflict. There was a real sense of dissatisfaction that the Biden administration’s policies are really not significantly different than the policies of the Trump administration or any other US administration over the past several years.”

Matthias Schmale, the Gaza director for the UN agency for Palestinian refugees (UNRWA), reported “heavy bombardment” near the agency’s compound in the early hours of Sunday.