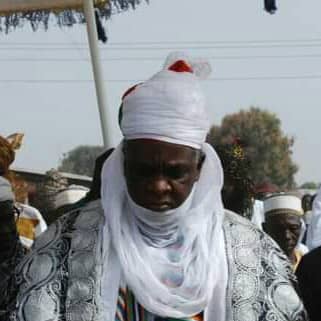 The night ended up weird and gloomy pondering on how innocent people in this country suffer from the pounce of Justice. It is always a justice denial when one decided to tour the path of fairness.

This was finally the fate of late Dr Ishaku Damina, the revered and the paramount traditional leader of Akurmi (Kurama) nation; one of the densely populated tribes in Lere Local Government area of Kaduna State.

The last and probably not the least distinguished lamp extinguished, sacrificial lamb that was slain.

Of no crime of his, he towered the tough, rough and rogue path; translating to fifty-one days incarceration, like Joseph K, in Franz Kafka’s novel, “The Trial,” for undefined offence(s) – beyond pornographic book called the law – he didn’t know he has committed.

Five years of suspension was slammed on him, with an undecided judgement and in savage servitude with suicidal salary denial for two terrible years and five ferocious months.

This happened in a country we all called our Father land that sings in rhyme, devoid of rhythmic antic anthem of unity in diversity, in the land “where Justice and Peace shall reign.”

In all these – the psychological trauma, the frustration and the emotional distress was the Battle of the mind that culminated in making you join the league of our ancestors great beyond.

Thank God death is a universal blanket, it covers all, it goes for all people, race and nations are all included in the coming special blanket cover (death)@. Neither white nor black, it must one day wear one up, willingly or unwillingly.

Ishaku, until he had his last breath, sought for Justice, sought for peace to reign in Kurama land, Kaduna state and Nigeria as a nation.

The land indeed needs Divine answers to your prayers wherever you may be.

Remember, Kaduna state is becoming a boiling point, seeking for a divine intervention with a view to getting out of the maze.

The case of Damina in Kaduna has shown to be a clear indication that the judicial system is defeated and defaced with element of corruption.

The common man does not have a certainty of life, security, fairness, justice, rule of law, equality before the law and fundamental human right.

Judiciary is seen to be a savour of pains instead of the last hope of the masses. What an irony! It is a system in delusion, a system failing and no one seems to uphold its sanctity.

Wallahi! I am just fed up with the judicial system that vilifies and oppresses the prey and glorifies and gratifies the predator. suffices to say, a system that allows the guilty to walk, hover and cruise the corners of life with no fear; to walk freely while another, of the same political offence or whatever it is, rot in jail.

I’m compelled to say the obvious that Nigeria is not fair to people like the late Damina.

May be the system was partially designed and ordained some people to be senior citizens of the nation (SCN) while many others like the late Damina remain not just aliens but slaves subjected to suffering.

This is where I see the former becoming a taskmaster; enslaving the latter because of a deflection that have perforated the working system.

Yes! I am fed up with the whole thing. My hope, wish and prayer is for our leaders in this country, Kaduna state in particular, to have the courage to fight the wrongs.

I am fed up of being fodder to merchants of death and chaos who can unleash mayhem of death to innocent citizens.

I am fed up of being a citizen of a country that is constantly torn apart by its primary beneficiaries in the name of political patronage or lack of it.

I am fed up by being told I am not wanted anywhere I go because I am a Kurama man – Kabila (Minority).

This is what I see happening to many tribes in this country.

I am truly fed up with being looked down as a parasite waiting for handouts to survive.

I am fed up with being a citizen of a country where the victim is regarded as the villain while all those who claim to speak for him and represent his interests choose to be silent or even indifferent in the face of injustice, simply because they cannot afford to upset the apple cart.

This is a supposed Nigeria of our dream.

Now a country is in disarray because of vested interest of political class and religious pundits, threatening its corporate existence.

Damina, I moaned your demise. This has befallen us in a country everyone is claiming to be one.

Dr Damina, I have interacted with you in quite a number of times; I saw in you the public service and servant -Leader nature.

This is probably because a good leader is always known, you can’t buy one in the market.

You were good, your people saw the threads devoid of any threat of leadership in you and they bought you over for a true guide as a worthy leader.

This is what the Kurama race have discovered in you few decades ago. Today their joy has been scuttled away, only the God of comfort will give the desired peace.

A hallmark of a great leader is not measured in castles and materials but in his ability to groom and lead successful disciples. This is the life Ishaku lived until he had his last breath.

Sir, you were a colossus in the jungle of life. Your ability to identify, nurture and engage talents is unequalled.

Your life has been a testimony of human capital development, peace in the nooks and crannies of Lere; peace in Kaduna and of course peace in Nigeria and the world; an unrelenting struggle for a better life is what you died fighting for. So unfortunate you died with none of these wishes of yours surfacing as a glimpse of hope to humanity that our communities are safe and habitable for all to live in peace.

It worries me so much why you should be humiliated to this extend.

I remember the story of the “giants”, they died because an enemy within their camp betrayed them. We can deny this fact, an enemy within knows the strength of Samson the great warrior.

It’s not a gainsaying that we live among Judas. We have the Judas in and around us. It is true that Judas are our Brothers, our friends and the government whose leadership styles ought to be fairness for all people.

If you remember the story of many great men, home and abroad, temporal and spiritual, they were brought down by their kinsmen.

I’m convinced and I have the believe beyond any shadow of doubt, Damina was the sacrificial lamb, slain to serve some people’s agenda He was the sacrificial lamb to satisfy the glutton desire of others who see themselves as political gladiators and gullible actors primordially planting and uprooting whatever they wish to. Akurmi Ziman!

Love him or not, there is no doubt that Damina was a remarkable leader, a fearsome opponent and a legendary tactician. His charismatic leadership has made him undisputed leader of the Kurama Race and Nigeria. His incredibly, large and generous heart, astuteness as Akurmi leader and uncommon intellect have become the stuff of a legend in our land.

At this juncture, I really sympathise with the entire Akurmi race, consoling everyone that late Damina was a model, an embodiment of wisdom and had an unconventional commitment to purpose, displayed an unwavering loyalty to his land and his people.

Let’s cry no more. He has paid off the price, he paid in full, he paid for me and you to have a liberty when the truth shall be finally revealed.

His brilliance and doggedness were certainly going to be rewarded. His desire and passion for his homeland were unquestionable as the result produced during his reign was nothing short of admiration and laudable; with great zeal he dedicated himself and through hard work and discipline he brought Kurama Kingdom into greatness.

You come, you lived, you served well the country and the people God has entrusted in your care. Neither will posterity ever forget you for this laudable landmark.

May your soul find rest in God’s bosom.