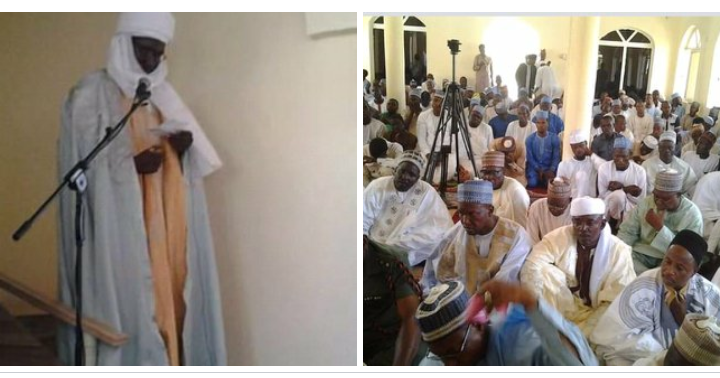 * Don’t leave Qutba lessons, in the mosques, practice what is learned

It is yet another Friday, the second Friday in the month of Shawwal. One of the meritorious aspects of the month of Shawwal is that it has been chosen by Allah for the celebration of ‘Eid-el-Fitr; the day designed as a sign of gratefulness by the Muslims on the accomplishment of Ramadhan and as an reward by Allah.

to be showered with Shawwal extended blessings started in the blessed month of Ramadhan, the Qutba reminds the Ummah about fasting for six days in this month.

“Whoever fasts in Ramadhan and follows it with six days of Shawwal, it will be as if he fasted for a lifetime.” (Narrated by Muslim, Abu Dawood, Al-Tirmidhi, al-Nisaai and Ibn Maajah).

From the hadith above, the minimum reward for a deed is multiplied ten folds. Now if someone fasts thirty days in Ramadhan, this is equivalent to fasting three hundred days, adding six days in Shawwal will make the total 360 days’ worth of fasting.

Although the fasting in the month of Shawwal is not obligatory, it is highly recommended, the Qutba in one if the mosques encouraged.

On societal reorientation, another Qutba in another Mosque questions the moral sensibility for societal correctness, it challenges, prejudice, pride, avarice, backbiting, backstabbing, hatred and jealousy among other Satan hypnotic ugly human nature, so unfaithful to the preferred and professed faith, progress and development.

The Qutba laments that having fallen deep to the devil’s web, greed and selfishness have jointly formed part of the domineering pillars that destroy communality, sympathy and empathy, with properly unmanaged unconscious bias; the birth of insecurity and other forms of insurgencies.

The Qutba points out that behind any unfashionable, unfaithful, hard heart without the air about humanity leadership, there lies corrupt, savage, barbaric and devil deceived lieutenants and/or advisers.

The Qutba questions the rationale behind the proposed fuel hike in the face of economic and financial crises, where citizens are starving, could not afford basic social amenities and how eventually, commodity prices could hike four hundred times the four hundred naira proposed fuel pump price.

The Qutba equally Questions the undue censorship and uncalled for sanction against survivors’ families who would not want to have their family members waste away in the hands of kidnappers with hideous cruelty, an unchallenged heinous crime.

It is the responsibility of the constituted authority to keep peace and provide adequate security, to sheild citizenry against predatory tendencies and activities.

If the constituted authority would not address such terrorism as kidnapping for ransom, she shouldn’t double-charge the oppressed and exploited, hapless and helpless citizens who submit to paying ransom to have their family members regain freedom, as this could amount to senseless executive exploitation; an insult upon injury, the Qutba would judge the abnegation.

Failure in leadership is when the good relinquishes power and authority in political terms, to the riotous bad and the unruly ugly. The Qutba therefore invites the good, the faithful, disciplined, experienced and knowledgeable people to join politics against irresponsibility, heartlessness and cluelessness.

The Qutba at the Mosques across the country the Periscope reporters observed, jointly pray against suppression and holocaust on innocent aged, women, children and armless Palestinians, as much as invite the citizenry for continued prayers against complicity to insurgency and all forms insecurities in the country where love and peace and unity in diversity form the anthem rather than anathema.
Peace!