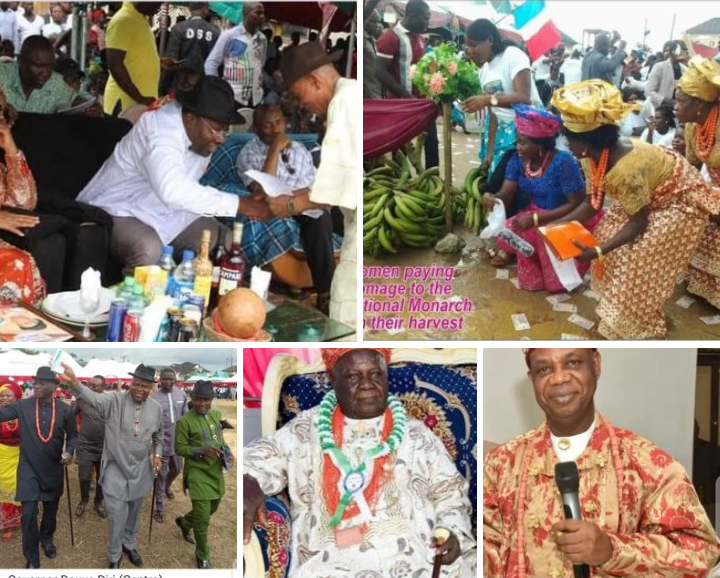 THE PEOPLE, ANCESTRY, ORGANIZATION AND CIVILIZATION

nts of 30 communities in Yenagoa Local Government Area of Bayelsa State, Nigeria, with Yenebebeli Two as the newly recognised community.

They sprawl along the Chief Melford Okilo Road, Sani Abacha Way, Isaac Boro Way, Epie and Ekoli Creeks and River Nun. Some of them are on the outer fringes of the New Gateway Road, the Outer Ring Road and the beginning of Ayama-Ijaw-Oporoma Road.

The ancestral and migratory root of Epie-Atissa is traced to Akoko Edo Local Government Area in Edo State, from where groups moved to various places, untill Prince Zue, one of the sons of Oguan, the ancestor, founded Yenizue-Epie as the first place of settlement. A group of elites from Epie/Atissa, recently visited Akoko Edo and reaffirmed this claim.

Aside the Akoko Edo and Oguan origin, a few communities in Epie-Atissa, have their own migration narratives, few of which also finally tend to link the Edo origin, as first place of migration.

The language spoken by the people of Epie-Atissa ethnic nationality is known as Epie, under Delta-Edoid classification, and very similar to the language of Ukoroho group of people in Akoko Edo.

The people of Epie-Atissa, share common ancestral and migratory links with their brothers: Zarama in Yenagoa Local Government Area; Engenni and Degema of Rivers State, and by extension, Urhobo and Isoko, with similar origin, language and culture.

Life was anchored on a communitarian philosophy of love and brotherhood, Ubuntu. Ancestral guiding spirits and ‘Inibru’ supplemented man-made laws, and slammed nemesis on offenders.

Due to warm embrace with the missionaries, Anglican, Catholic and Baptist churches and missionary primary schools were established in many communities, developments which led to decline in paganism and superstition. Bishop Dimeari Grammar School and St. Jude’s Girls Secondary School are part of the colonial legacies which brought formal education to the people.

Yet, the the early leaders resisted domination, for instance, the Odiarabara War against British imperialists at Yenaka, led by Chief Fefegha Kokime of Yenagoa in 1894, over seizure of his goods because of non-payment of tax.

Another example is the 1958 Epie women’s riot against introduction of school fees by the colonialists, a matter they won at the colonial court in Degema, with Barr Naboth Graham Douglas as their lawyer.

The early contemporary leaders restructured Epie/Atissa into two clans, to get a colonial district for political and administative benefits, through a letter signed by Late Chief Korisei Torupina and other leaders in 1927.

Following the recognition as a district, a colonial customary court was set up at Onopa to stop the people from pulling canoes to litigate cases at Brass Island Province and Sagbagreai, where they lost cases because of wrong interpretation of Epie by Izons trained as interpreters.

A colonial sports council, was also set up in Yenagoa, the present location of the Samson Siasia Stadium.

Constituency and wards, were created, though still grossly inadequate, given population surge and under-representation in the legislatures of the three tiers of government.

THE BRUNT OF CAPITALHOOD AND DEVELOPMENT CHALLENGES

Blessings of Hosting the State as capital from 1996, are not without brunt of State Government’s land acquisitions; losing of Yelga Council’s property and many sources of revenues to the State; delay in implementation of master plan for physical development and non-demarcation of aboriginal settlement from Government Reserved Areas.

Influx of teeming visitors is threatening the language and culture of the aborigines tagged with a minority status, that has become the people’s albatross.

Sadly, their natural resources, especially, land and houses they depended on, to eek out a living, are even depleting.

These are not to say, it has never being good at all. Epie-Atissa got topnotch positions of pioneer Head of Service in the person of Deacon Bob Ozaka, and Prof. Steve Azaiki, as pioneer Agriculture Commissioner, and later pioneer Secretary to the State Government, under Late Chief D. S. P Alamieyeseigha. Andd later Chiefs Emmanuel Paulker; Diekivie Ikiogha; Mrs. Diezani Madueke; Dr. Josephine Igodo and others in top public offices.

Giiven its vantage position as Capital City, Epie-Atissa, would have experienced quicker transformation, but, it is not yet Uhuru for majority of the people.

Poor enterprenuership orientation among many Epie-Atissans who though had landed resources, yet could not diversify the incomes, could also be cited for the the economic downturn.

Besides that, docility of the elites; self-protectionism; disunity; fear of competition; greed; a disatified and unwilling followership, have been main obstacles at synergistic and strategic approach to the overall development of Epie-Atissa, by its own people, thus also affecting effective collaboration with the State Government to meet the yearnings of the people.

Traditional rulers; Oguan Congress, student and youth bodies, are equally yet to really coordinate the people for the realisation of the common good.

The Obunem-Epie and Adiafa-Atissa Festivals, though have preserved the Kingdoms’ cultural heritage, are like annual entertainent jamborees, at the expense of appraisal and solutions to the myriad challenges.

YOUTHS TO THE RESCUE

One of the only attempts to press for a better deal from the State Government was in the Alamieyeseigha and Dr. Goodluck Jonathan eras in which Epie-Atissa youths made some demands. Consequently, Late Governor Alamieyeseigha cancelled the obnoxious land use policy of the Philip Ayeni administration. The arpatheid policy, limited the natives from using lands, 500meters after Mbiama/Yenagoa Road.

The Alamieyeseigha administration improved a bit on slots of political appointments, contracts and employments to the host of the Capital, in addition to a monthly N5Million grant to Yenagoa Local Government Council, to aid development. Former Governor Jonathan created Epie/Atissa Rural Development Authority, to compensate for non-creation of local government for the people, when Alamieyeseigha created 24 of them.

Given the challenges, one way forward, is for Bayelsa State Government to establish Yenagoa Capital City Host Communities Development Commission.

The other is formulation of a land swap policy in which the State Government, could acquire or purchase lands and reallocate to those whose lands have been totally taken over by Government, as done in Abuja, the FCT. Or, build houses and resettle indigenes swallowed up by government’s buildings, besides demarcating native and government’s areas.

From the entire narrative, a convoke of all classes of Epie-Atissans, to look inwards, tinker and proffer solutions to the Kingdoms’ development challenges, is another potent internal mechanism, that was long over due.

Therefore, the maiden edition of Epie Development Summit, billed for Tuesday, June 1, 2021, at the Gabriel Okara Cultural Center in Yenagoa, at 9a.m., is a step in the right direction.

Convened by Prof. Steve Azaiki, it will mainly discuss how to reposition Epie-Atissa for Economic Development, at least eight speakers leading discussions in topical areas, to over over 500 expected participants.

WHAT IS EXPECTED OF THE PEOPLE

As Albert Pike puts it, “What we have done for ourselves alone dies with us; what we have done for others and the world remain with us and is immortal”. Therefore, the time is now, for all Epie-Atissans to jaw jaw and selflessly contribute to the development of the Kingdoms.