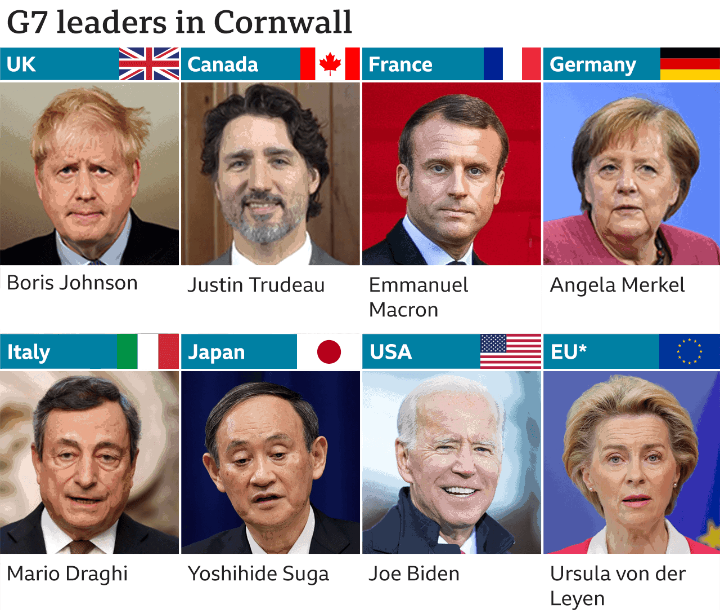 World leaders are gathering in the Cornish resort of Carbis Bay, for face-to-face meetings at the summit of G7 nations.

Among them are Chancellor Angela Merkel of Germany, and President Biden, who is making his first foreign visit since taking office.

What is the G7 and when is the meeting?

The G7 (Group of Seven) is an organisation of the world’s seven largest so-called advanced economies. They are Canada, France, Germany, Italy, Japan, the UK and the United States.

China has never been a member, despite its large economy and having the world’s biggest population. Its relatively low level of wealth per person means it is not seen as an advanced economy in the way the G7 members are.

Representatives from the European Union are present while India, South Korea and Australia have also been invited this year.

Why is the G7 summit in the UK?

The UK is holding the G7 presidency for 2021 so this is where the summit is taking place.

The meeting is taking place at the Carbis Bay Hotel near St Ives in Cornwall.

It is not the first time the world leaders have met in a beach resort. The last G7 summit, in 2019, was held in the French seaside town of Biarritz.

Day-to-day life for locals and tourists in Cornwall is affected, including road and path closures.

In some areas of St Ives, residents have to provide proof of address in order to access their homes.

The UK government said it was important for world leaders to meet in person and regular Covid testing would take place.

A British police officer walks past The Cornish Arms gastropub in St Ives, Cornwall on June 10, 2021,

What does the G7 do?

Throughout the year ministers and officials from the member countries hold meetings, form agreements and publish joint statements on global events.

The main event is when the G7 leaders come together to talk about the biggest issues of the day.

What’s on this year’s agenda?

The agenda starts with a dinner at the Eden Project on Friday night, attended by the Queen and members of the Royal Family.

The main topic of conversation for the rest of the summit is Covid recovery, including “a stronger global health system that can protect us all from future pandemics”.

Boris Johnson held talks with President Biden on Thursday afternoon. They covered topics including the President’s concerns over the peace in Northern Ireland.

Most of the conversations take place behind closed doors, but there are set-piece moments on camera – including the obligatory leaders’ photo.

At the end of the summit, the UK – as the host nation – will publish a document called a communique. This outlines what has been agreed by the leaders.

Will there be protests and more police?

Protesting and policing are both more difficult this year because of Covid restrictions.

A cruise ship has docked in nearby Falmouth to accommodate all the extra security officers.

Demonstrators have been told they can gather in four approved protesting sites, including one in Exeter – more than 100 miles away.

Police have said they are “not naïve enough to expect that every protest will take place solely in those four sites”.

Climate activist group Extinction Rebellion planned a number of demonstrations, including a march from Plymouth to Carbis Bay.

Does the G7 have any power?

It can’t pass any laws because it is made up of separate nations with their own democratic processes.

However, some decisions can have global effects.

For example, the G7 played crucial role in setting up a global fund to fight malaria and Aids in 2002.

However, the G7 has been criticised as being an “outdated group of countries”, partly because it does not include two of the largest countries in the world – India and China.