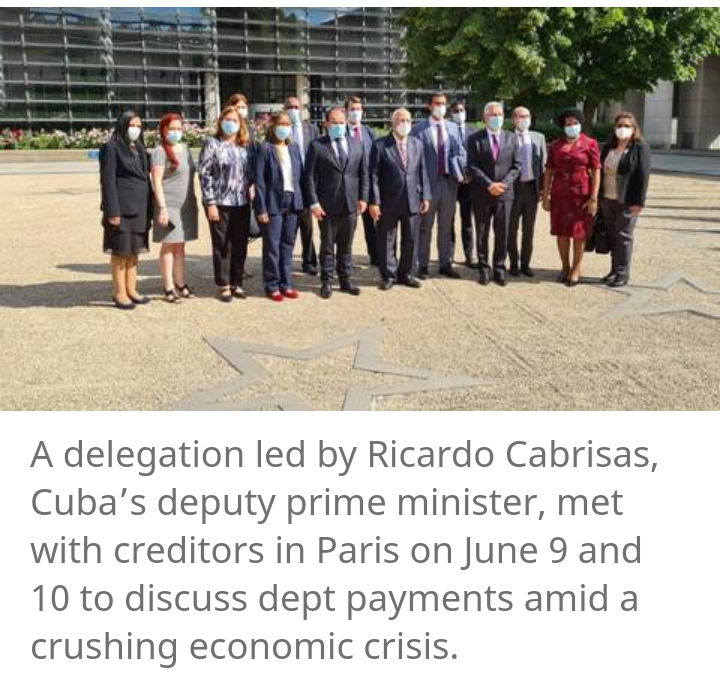 Creditors in the Paris Club gave Cuba yet another pass on payments due under a 2015 agreement after hearing about the “unprecedented hardship” the tightening of the U.S. embargo has created and the crisis triggered by the COVID-19 pandemic.

A delegation led by Ricardo Cabrisas, Cuba’s deputy prime minister, was in Paris this week to make a presentation to Emmanuel Moulin, current chairman of the Paris Club, and to other representatives of wealthy creditor nations, showing how the island’s economy is struggling under the worst crisis in decades, according to Prensa Latina, Cuba’s state news agency.

The top Cuban official focused on the consequences of the Trump-era sanctions on the island’s economy, but also detailed how COVID-19 has pummeled its tourism sector, the report said. Cabrisas also mentioned the effects of climate change, which has increased the frequency and intensity of extreme weather events. Cuba is frequently on the path of hurricanes, having experienced at least 54 Atlantic hurricanes or tropical storms since 2000. In November last year, Tropical Storm Eta cause flooding and destructive storm surge along the coast.

“According to diplomatic sources, the negotiations happened in a constructive climate of mutual understanding, which allowed the visiting delegation to explain the measures the island is adopting to ensure economic recovery and to showcase the work of its scientists to fight COVID-19 and to create five vaccine candidates,” Prensa Latina said.

Cuba has repeatedly missed payments in all its debts over more than three decades. The Paris Club debt was already renegotiated in 2015, when Cuba reached a historic agreement with 14 nations led by France. They agreed to cancel $8.5 billion in overdue interest payments in exchange for a promise by Cuba to pay off $2.6 billion of the original debt — first defaulted on in 1986 — over 18 years through 2033. The group of Cuban creditors includes Australia, Austria, Belgium, Canada, Denmark, Finland, France, Italy, Japan, the Netherlands, Spain, Sweden, Switzerland and Britain.

Last year, the island asked the creditors for a two-year moratorium and the waiving of fines on missed payments. They agreed to one year and demanded a new round of talks this year to discuss unpaid maturities and come up with an agreement for future payments.