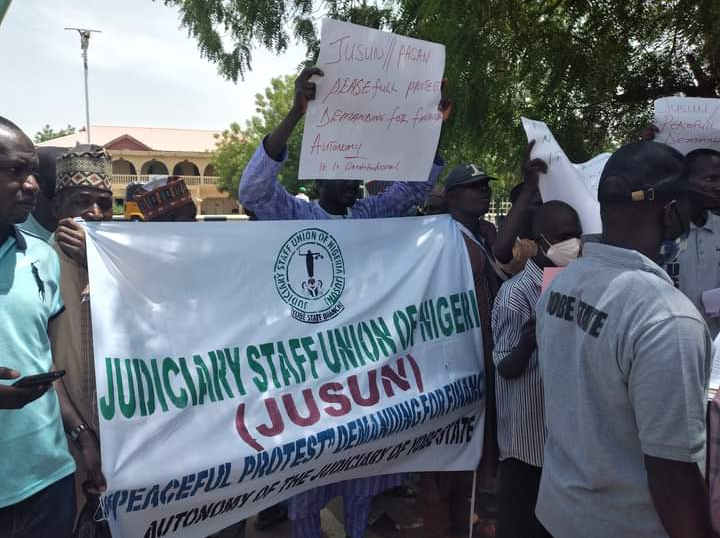 The Judiciary Staff Union of Nigeria (JUSUN) has suspended the nationwide strike, which lasted for over two months.

JUSUN had, on April 6, embarked on a nationwide strike in protest of the non-implementation of financial autonomy for the judiciary.

The union has resolved to suspend the industrial action during its national executive council (NEC) meeting, which held on Wednesday, in Abuja.

According to tge union leadership, JUSUN decided to call off the strike following the intervention of the National Judicial Council (NJC).

“NJC, which is the highest body of the judiciary, appealed to the union to give them two to three months to weigh into the matter and make sure they actualise what we are asking for. They noted that the public is suffering. We decided to accord them that respect,” the leadership said.

The communique issued at the end of the meeting kicked against “the actions of the governors of Kaduna, Plateau and Benue states for withholding salaries of judiciary in their various states for months and urge all governors involved to do the needful”.

“NEC in session unanimously reiterates that no member of JUSUN should be victimised on the strike action,” document reads.

The union also thanked the chief justice of Nigeria and all heads of courts for their patience during the industrial action.

President Muhammadu had, in May 2020, signed an executive order granting financial autonomy to both the judiciary and legislative arms of government — but the order was suspended after state governors raised concerns.

In the past two months, several meetings were held with relevant stakeholders in an attempt to bring an end to the strike.

JUSUN had insisted that funds due to the state judiciary must be deducted from source, starting from the May 2021 Federal Account Allocation Committee (FAAC) revenue.

The Nigeria Governors’ Forum (NGF) set up its own committee headed by Aminu Tambuwal, Sokoto governor, which subsequently proposed a template for the implementation of autonomy for the judiciary.

The governors, in their proposal, sought the creation of a State Account Allocation Committee (SAAC) to oversee the distribution of funds to the three arms of government at the state level.

The governors’ forum also proposed the enactment of funds management laws for state judiciary and legislature.

On June 4, Chris Ngige, minister of labour and employment, had expressed optimism that all issues would be resolved.

Ngige said Kayode Fayemi, Ekiti governor, and Tambuwal, had on behalf of the NGF, appended their signatures to the proposal and agreement, which was reached on May 20