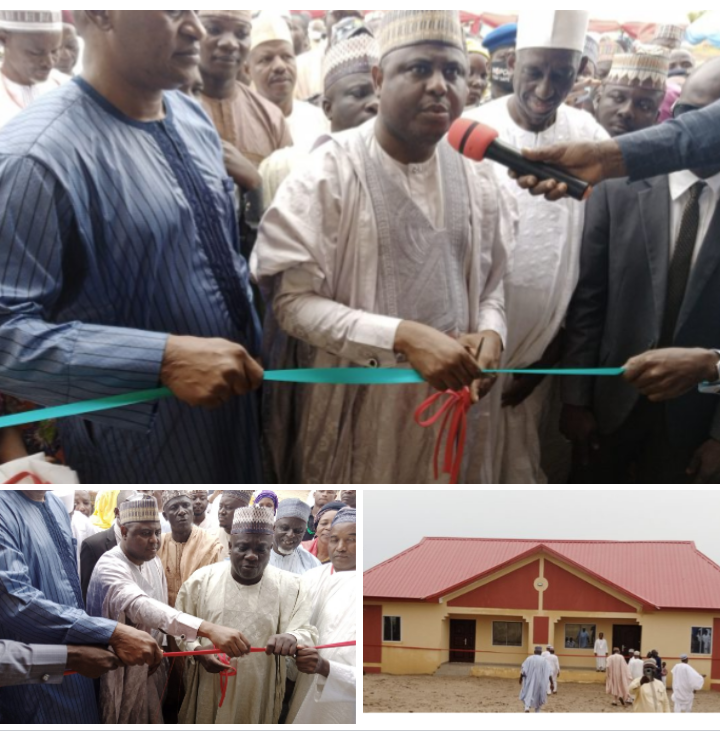 Commissioning the projects Saturday, Hon Namdas, who commended the Jada Progressive Association JAPA for putting their request for the project said, was happy that the consultants and resident doctors posted to the hospital for medical outreach from FMC Yola would now have a more secured accommodation to be able to render effective and efficient healthcare delivery services devoid of the fear of insecurity associated challenges.

The House of Representatives member has appreciated the effort of the Medical Director Federal Medical Centre, FMC Yola, Prof. Auwal Muhammad Abubakar for citing the medical outreach in Jada to cover the southern zone of the state, which he observed, would reduce the rate of people going to Yola and other places for medical services as well as provide quality healthcare delivery services to the people of the area.

“Today is Democracy Day and as the representative of the people, I feel the better way to celebrate the day is by commissioning projects that have a direct effect on the people of my constituency.

“These doctors’ quarters will go a long way in ensuring prompt and effective healthcare service delivery to the people of Jada, Ganye, Touno, and Mayo-Belwa local governments.

“Doctors and consultants who hitherto lived in Yola and traveled to Jada to deliver their services, now have a place well furnished to stay and do their work comfortable,” he said.

Commending the lawmaker for facilitating the building of the doctors’ quarters as part of his constituency project, the MD FMC Yola, represented by the Head of Clinical Services, Dr. Dahiru Ribadu said the facility was a great expectation, pointing out that the doctors posted to the outreach who would be the occupants of the quarters would put it to proper use as it would enhance timely and quality service delivery.

“Before now, our doctors were living somewhere far away from the hospital, there was also the issue security in the isolated area, added to the lack of utility vehicle, it becomes so difficult for them to respond to urgent calls, mostly at night.

“Now with these buildings, doctors will be stationed within the hospital. They will also be able to respond to calls and render services to patients anytime they are called upon,” he said.

In his goodwill message, the interim state chairman of the All Progressives Congress (APC), Alhaji Ibrahim Bilal, having commended the MD FMC Yola, congratulated Namdas and the people of his constituency for celebrating Democracy Day with the commissioning of such commendable project.

Bilal described Namdas as God sent to respond to the calling of his constituents, where he listed numerous projects and empowerment programmes that made the achiever in the lawmaker, which include facilitating the recruitment of young men and women into the Nigerian Army, Police, and other paramilitary agencies.

The JAPA leadership, the APC women wing and other stakeholders have in their goodwill messages commended the lawmaker where they made further request of the provision of the hospital ambulance and building of amenity ward in the hospital.

They also challenged the chairman of Jada local government for further intervention in the health facility being a collective undertaking.

The commissioning was attended by management staff of FMC Yola, a former member of the House of Representatives, Fons Nwangubi, members of the state executive council of the APC in the state, other party stakeholders and sons and daughters of the constituency.