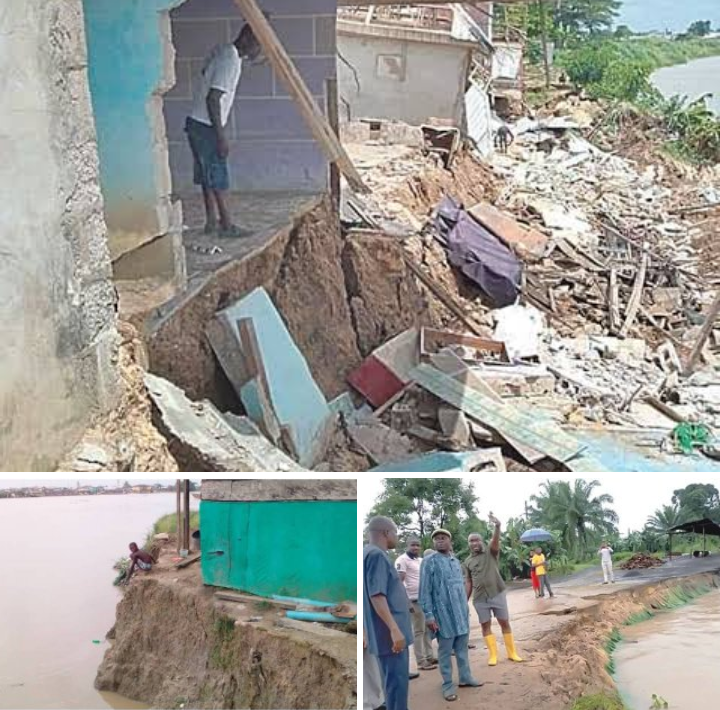 Year in year out, the people of Obogoro-Atissa in Yenagoa, the Bayelsa State Capital are exposed to unfathomable menace of coastal erosion.

Indeed, the disaster has made Obogoro a metaphor of environmental degradation among many other communities in the oil and gas rich, but impoverished Niger Delta region.

About six decades of oil and gas exploration; use of pulverizing chemicals and dynamites for exploring the black carbon; regular movement of river crafts belonging to oil and gas companies as well as fishing firms, have caused incalculable damage to lands, rivers and the entire ecosystem.

These are in addition to the fragile nature of the beautiful and endowed environment, which is rather paradoxically described with the politically-coined term of difficult terrain.

Yet, trillions of dollars are milked away from the so-called difficult terrain, by the Federal Government and its ally oil firms, without proactive remediation of the spoilt environment. Providing dequate compensations to host communities, is also a far cry. Smartly, one or more of the foreign firms behind the environmental spoilation, have commenced moves or selling assets, to quit exploration of and gas in the Niger Delta, already rapped and rendered to a shadow of itself. These moves are hinged on insecurity and global downturn in the industry, mostly due to shifts towards alternative sources of environmentally friendly energy, innovations in electronic cars, robots and drones technologies, which are are creating new investments.

The coastal erosion mishap in Obogoro, could be attributed to natural factors, such as softness of the land, water waves and annual flood. It could also be traced to man-made factors related to outdated methods of crude oil exploration, sand dredging and navigation by heavy duty boats.

The Ekoli Bridge, connecting the community and others to Yenagoa City, a landmark infrastructure built by the then Governor Goodluck Jonathan, stands the risk of being affected. Many other buildings owned by individuals, could equally be swept away in no distant time, if lasting solution is not quickly proffered. 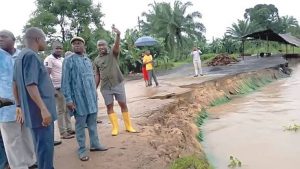 In order to reinforce its agitation, Obogoro Chiefs Council and elites, also synergized with Prof. Steve Azaiki, who on its behalf, submitted a petition to the Speaker of the House as a Matter of Urgent Public Importance.

Making the presentation on June 8, 2021, Prof. Steve Azaiki, representative of Yenagoa-Kolokuma/Opokuma Federal Constituency, narrated the plight of the community. He called for Federal Government’s urgent intervention. 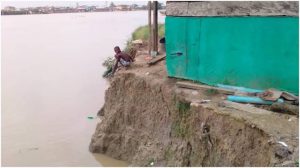 Prof. Azaiki urged that the Federal Ministry of Environment; Ministry of Works; Ministry of Niger Delta; Niger Delta Development Commission (NDDC) and the Ecological Fund Office, should be directed to come to the aid of Obogoro and Famgbe.

It could be recalled that, in the past, Famgbe-Atissa in Yenagoa Local Government Area, lost to the erosion, St Paul’s Primary School; a Community Secondary School; about 400 privately-owned houses, including the historic first block house and places of worship.

A big clarion bell, which served as an artifact with the bold inscription, Famgbe-Epie as it was then called; forests; farmlands; human lives, among others, have gone with the menacing coastal erosion. The town has many times shifted its location upwards, to escape from the disaster, without governments’ and oil firms’ support.

These are besides other communities in Bayelsa State, facing similar plight, despite being main contributors to the federal revenues through oil and gas.

Lamenting the incidents of coastal erosion in his Constituency and Bayelsa State, Prof. Azaiki unequivocally demanded for budgetary provisions and approvals for shoreline and embarkment projects as permanent solutions. Azaiki cited Obogoro and Famgbe as the most pathetic cases presently.

The Lawmaker, therefore called on the House of Representatives to direct the Executive Organ, to release ecological emergency funds; provide low-cost houses and relief materials for victims of the disaster in Obogoro and Famgbe, and also proactively salvage other affected communities.

Accordingly, the Speaker, Rt. Honourable Olufemi Gbajabiamila, directed the relevant House Committees to forward the demands to the appropriate authorities in the Executive Arm, and ensure that they are looked into and acted upon.

Before then, Prof. Azaiki had written letters to President Muhammadu Buhari, through the Minister of Environment, Dr. Muhammad Abubakar; Minister of Niger Delta Affairs, Senator Godswill Akpabio as well as the Ecological Fund Office under the Presidency. He had also visited the offices to press for a permanent solution to the Obogoro erosion mishap.

The efforts of Obogoro Community; Bayelsa State Government; Prof. Steve Azaiki, the House of Representatives and all those who have made moves for tackling the disaster are worthy of commendation.

However, concrete actions really need to be taken before flood worsens the disaster in the two most-ravaged communities.

In this regard, my call as the writer on this mishap, and the quest of the victims, is for the Federal Government not to keep the demands in the bureaucratic cooler, while the people continue to suffer.

Therefore, the Federal Government under President Muhammadu Buhari, should urgently approve the demands in order to save Obogoro, Famgbe and the other communities from further pains. They should be proactively saved from imminent extinction from the map of Nigeria, the way similar matters are quickly attended to in other parts of the country.

Prof. Steve Azaiki and the House of Representatives should also not rest on the oasis until the Federal Government acts on the demands with the expected urgency.

That way, Obogoro and Bayelsa state which is one of the major sources of oil and gas revenues, would rejoice. And the people will have a sense of belonging in the country, just as the case of other communities should also be tackled.

And the time to do so is now!