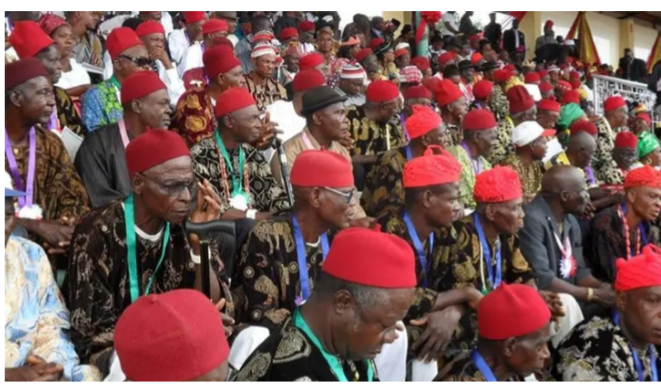 Ohanaeze Ndigbo, the apex Igbo socio-cultural organization, has told the Nigerian government to use the advantage of the secession agitations by the Indigenous People of Biafra (IPOB), Movement for Actualization of Sovereign State of Biafra (MASSOB) and other pro-biafra organizations to integrate Ndigbo in power sharing, equity and cooperation by making 2023 presidential race the right of the Igbo nation.

In a statement made available to DAILY POST, in Umuahia, the Abia State capital, on Saturday, the Engr Chidi Ibe-led Ohanaeze Ndigbo lamented the current scenarios playing out as a result of the rising agitations for secession by different ethnic nationalities in Nigeria particularly in Igbo land, saying that it is right time the Nigerian government engages in genuine negotiations with aggrieved parties aiming at finding lasting peace in the country.

The highest Igbo group regretted the controversies surrounding the rearrest and extradition of Mazi Nnamdi Kanu, the leader of IPOB, to Nigeria for the continuation of his trial, urging the government to adhere strictly to the rule of law on the prosecution of the alleged treason charges preferred against the secessionist leader.

Ohanaeze also posited that Kanu should be forgiven and granted presidential amnesty and integrated in the scheme of things in Nigeria.

“Mazi Nnamdi Kanu had denied allegations on the incessant, indiscriminate, and extra judicial killings, insecurity ravaging our land.
Kalu should be integrated in the scheme of things in Nigeria,” the group said.

The group sued for peace in Igboland, stating that Ndigbo would not disown Kanu in his moment of trial.

According to the apex body, “Kanu is an Igbo son and cannot be disowned for misapplication and misappropriation of words and decisions in his thoughts, actions, and inactions”.

The faction further used the medium to call for caution among various youth groups, advising them to desist from any act capable of truncating peace and order in the country.