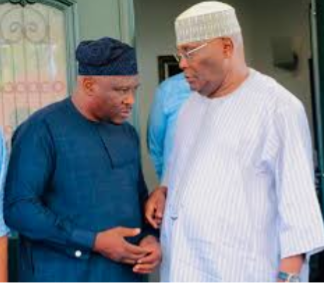 The media directorate, Adamawa state government House, on Sunday, rubbished insinuations of a crack in the relationship between Governor Fintiri of Adamawa state and the former Vice President, Atiku Abubakar, following the Governor’s interview on BBC.

Political opponents and critics quickly interpreted the Governor’s response to the question whether or not he would support Atiku’s ambition for President in 2023.

Adamawa government house media directorate in a statement said such interpretations were misleading and mischievous.

Special aide to the Governor, Solomon Kumangar, said the narrative projecting a face-off between Fintiri and Atiku were untrue and nothing short of “political vulturism”.

Kumangar said contrary to the impression some analysts gave to the development over the BBC interview, the bond between the duo is very much intact.

“They are always in touch with one another. Their relationship remains as strong as ever. And between the two of them, only they know how they manage their enviable relationship,” the spokesman said.

Kumangar explained that the Governor was reluctant to answer such a question of supporting Atiku in 2023 as it would amount to campaigns when INEC the umpire is yet to blow the whistle for 2023 elections.

He added: “like the biblical two sons when their father called the first son to the farm he obliged but did not go but the second son that declined went to the farm, from the BBC interview, Governor Fintiri was tactical not to be caught flouting the electoral act by an open campaign on the BBC interview.

“While this action has been widely accepted with great relief by lovers of democracy and the rank and file of the membership, we are concerned that political vulturism masquerading as ‘smart analysis’ is selling the commentary that this is a Fintiri-Atiku ‘rift’.

“Nothing can be further from the truth.

“To set the records straight, Fintiri has immense respect for Atiku, as the only son of the soil that has attained the height of being a Vice President.

Secondly, after the BBC interview, both Atiku and the Fintiri attended a ceremony in Yola penultimate Saturday when former chieftains of the All Progressive congress joined the PDP.

“Governor Fintiri and Alhaji Atiku Abubakar, who is reckoned as a founding father and member of the PDP, are both inspired by democratic norms, national interest and not at all by partisan motivations.

“These are the qualities that have made them move past cynical distractions.

“Try as hard as they could; the opposition parties have used all their intellectuals and their supporters in the media to break this relationship but have failed and they would not succeed.”

“For Fintiri, who has received much of the cynical commentary, Adamawa electorates know him as someone who will not do anything with bad intentions. Neither will he do anything out of partisan motivations or for himself.

“The Governor has made it clear several times that he will support Adamawa sons and daughters for any national appointment or elective position as the father of the state.

“When the time comes for election, the Governor will do the needful not openly campaign for the 2023 election in the media when the time is not ripe for it.

The statement came moments after Messrs Fintiri and Atiku were seen receiving a former SSG to the Adamawa state government and others penultimate Saturday.