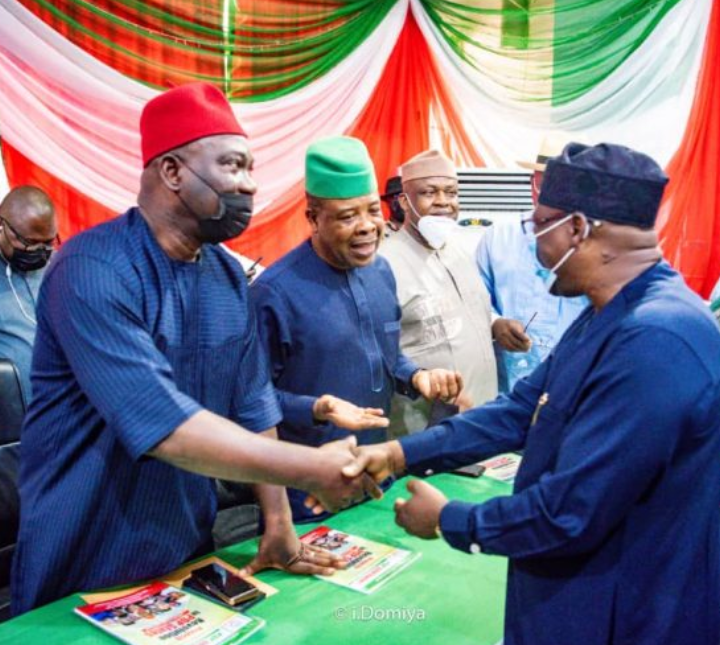 A statement Thursday issued by the Press Secretary to the Adamawa state governor, Mr Humwashi Wonosikou, explained that the decision was reached at the 93rd National Executive Council meeting of the party in Abuja on Thursday.

Governor Ifeanyi Ugwaunyi of Enugu State was appointed to head the committee set up to ensure zoning of party offices. The 44 member committee has Governor Samuel Ortom of Benue State as the Deputy Chairman.

The meeting deliberated on the way forward for the Party, noting that the myriad challenges facing Nigeria today requires new thinking to surmount them.

PDP expressed regret over the failure of APC led Government to address Nigeria’s problems even after riding to power on the mantra of change.

Addressing newsmen at the end of the party’s 93rd National Executive Committee, NEC meeting Thursday, national publicity of the party, Kola Ologbondiyan, said NEC received the report of Senator David Mark-led committee, impaneled to address the lingering court cases against the leadership of the PDP, stressing that the issues would be laid to rest in a matter of days.

Meanwhile, Vanguard gathered that governors were initially opposed to the choice of Fintiri given his closeness to former Vice President, Atiku Abubakar.

Atiku who is vying for the Presidential ticket of the party in the 2023 election was the biggest winner as the governors put away their fears to embrace Fintiri as head of the convention committee.

Suspended national chairman of the PDP, Prince Uche Secondus seemed the biggest loser as one of his staunch supporters, Governor Ifeanyi Ugwuanyi got the plum job of chairing the zoning committee.

With this development, governors have taken over the affairs of the party with the full compliment of the endorsement of NEC.

The NEC meeting was attended by Atiku Abubakar, 13 governors elected on the party’s platform, former PDP governors as well as members of NEC and Board of Trustees of the party.

The party’s inaugurated national campaign council is to work out mechanism that will ensure that PDP wins Anambra state gubernatorial election slated for November 6.

“I called on members of the council and Ndi Anambra to close ranks and deliver the state to PDP families.

“The cooperation of all and sundry is expected for the actualisation of PDP dream. I would like to seize this opportunity to appreciate on behalf of the PDP, all the aspirants, who dramatically contested with the candidate. Your spirit of sportsmanship is wonderful.

“I call on you to kindly hold hands together to deliver Anambra to PDP.

“We call on all of us to set aside differences and look at the PDP and Nigeria above any personal consideration. Anambra is winnable for PDP,” Akinwonmi said.

“We want to reassure the party that we are going to put in our best to ensure that we reconcile everyone,

“We know our people in Anambra are party people. We know also that there have been issues in the past, those issues that divide us.

“We are going to work day and night to ensure that we all step out of our comfort zones and step into the field to talk to the people, and to win back all who have left the party, as much as possible,” Okowa said.

He expressed optimism that there would be no rigging in the elections following the introduction of new technology by the Independent National Electoral Commission, INEC.

“I am glad that INEC itself has come out with a new device for the purpose of the Anambra election and it will be tested first in Delta State on Saturday.

“I am told from the information we already have ahead of the election in Delta on Saturday that it would not be possible for anybody to rig elections because there will be no use of incident forms.

“It is either your biometrics, or your facial is captured or else, you will not be allowed to vote.

“So we are definitely going to communicate with the people at the grassroots, and we know that we as a party own the grassroots in Anambra state.”

Okowa assured the party leaders that the council would work with the state campaign council to deliver Anambra state back to the party.

The party’s governorship candidate, Valentine Ozigbo, expressed gratitude to God and the party for counting him worthy to fly the flag of the party.

“I am here to also make a pledge that we will put in everything we have to ensure we regain the lost glory in Anambra state and PDP will take over this year.

“I am also here to make a pledge that not only are we going to win, but we will do our best to ensure not just to deliver dividends of a democracy, but we ensure that we set a standard and governance with Anambra state.

“Anambra people, if you’re listening to me today, your victory is here, your freedom is here, development is on the way.

“I am thankful for the joy that erupted when I was announced as the candidate. The greater joy will erupt on Nov. 6, when I emerged as a good governor of Anambra state,” Ozigbo stressed.

The PDP National Convention is to hold in October.