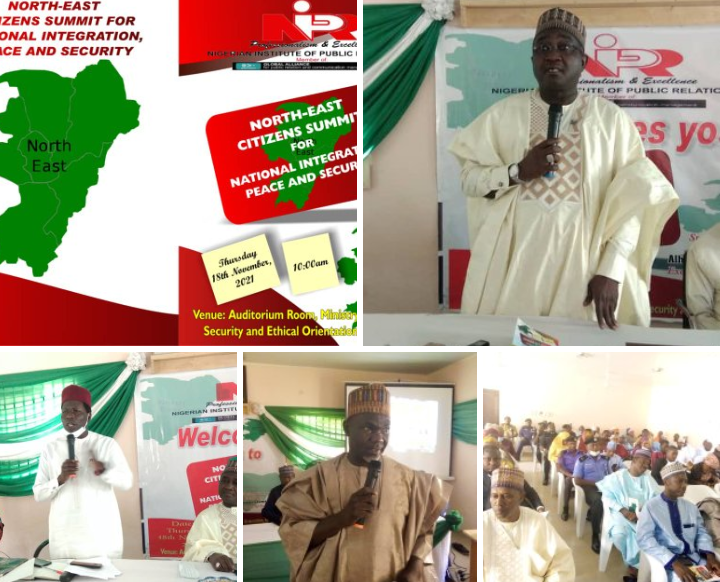 Gombe State Chapter has played host to the northeast national peace and security summit being organised by the Nigerian Institute of Public Relations, NIPR, holding across the country.

Held on Thursday, November 19, 2021, at the auditorium room, ministry of internal security and ethical orientation, Gombe state capital, northeast Nigeria, the summit is aimed at addressing insecurity challenges threatening the socioeconomic and mutual coexistence of the country with apprehensive citizenry and to ensure sustainable development.

The national president and council chairman of the NIPR, Malam Mukhtar Zubairu Sirajo explained that the project was to complement the efforts of the federal government in addressing insecurity associated challenges as a corporate social responsibility.

The chairman, national planning committee of the summit, Dr. Ike Neliaku has called on the citizenry to support the success of the summit aimed at assisting to ensure peaceful coexistence.

In his keynote address, the guest speaker, who is the former vice chancellor, federal university Gashua, Yobe state, Prof Andrew Haruna hammered on the importance of peace, the strength associated with unity in diversity, the wisdom in recognising and respecting the other and the need for people to form allied forces in addressing the faceless irreligious monster referred to as insecurity squarely.

In his remarks, the northeast coordinator of the summit, Malam Kabir Ibn Muhammad has called on the participants, cut accross the northeast, to endeavour to step-down the lessons learnt as they go back to their respective states.

Read below the communique at the end of the summit:

COMMUNIQUE AFTER THE NORTHEAST SUBMIT ON PEACE SUBMIT FOR NATIONAL INTERGRATION ORGANIZED BY NATIONAL INSTITUDE OF PUBLIC RELATION (NIPR) AS APRELUDE TO THE NAITONAL PEACE SUBMIT ON THE 18TH OF NOVEMBER, 2021 AT AUDITORIUM OF GOMBE STATE MINISTRY OF INTERNAL ssSECURITY AND ETHICAL REORIENTATION:

The meeting was successfully convened as scheduled; in attendance were representatives of the Six (6) states of the northeast geopolitical zone of Nigeria, security agencies, Civil Society Organizations, Faith Based Organizations, women groups and stakeholders.

I) That the Sixteen (16) thematic Areas as enumerated in the NIPR concept Document should form part of the final Document to be presented by the National Headquarters of the NIPR to the Federal, States and Local Governments in the Federation for their Implementation.

II) That every single Thematic Item should be a standalone, to serve as an advocacy tool for Nigerians, when campaigning and advocacy for Nigerians to buy in, and owned up the processes of social analysis and ethical reorientation, to change and restore our lost values and glory.

III) National integration and national cohesion are understood and submitted that that what is required is to restore the value of our leadership system, rebuild the trust we lost between us and the broken chain of our traditional communication system, which could be achieved through engaging the citizenry at all levels of our communities.

IV) That the National Orientation Agency should be reinvigorated, empowered to be able to carry out its constitutional responsibilities, as it used to during the military era.

V) The summit recommends that the three tiers of government should place priority on restoring the authority and strengthenig the functions of traditional institutions as it were pre-1976 LG Reforms, as a departure from being mere ceremonial appendage, having agreed that traditional leaders are the panacea to sustainable peace.

VI) Lamented that our partisan democratic culture since 1999 has been anything but democratic in the true sense of it; this negative political culture has immensely affected our national unity and cohesion and the system is Instituting culture of political violence in all its ramifications. The summit recommended the NIPR to, in collaboration with, media, NOA, IPAC and CSOs at all Levels of Governments, embark on a massive campaign, to create political awareness, for the atmosphere of violence free, fair and credible elections.

VII. That NIPR should partner with government to enlighten the citizenry about her constitutional responsibilities as enshrined in Chapter II “Fundamental Objective and Directive Principle of State Policies,” so that it may create awareness and reform citizens from unpatriotic attitudes.