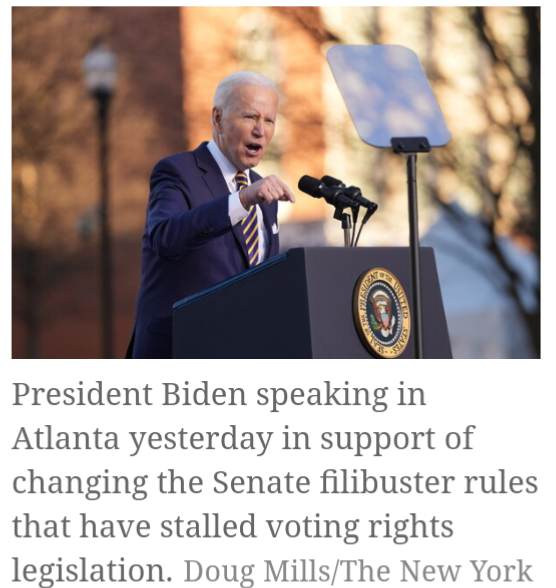 Speaking in Atlanta yesterday, President Biden endorsed changing Senate rules and weakening the filibuster to pass new voting rights legislation, warning of a grave threat to American democracy if lawmakers did not act to “protect the heart and soul” of the country.

“This is the moment to defend our democracy,” he said.

The procedural change has only the slimmest of chances of winning the support of all 50 Senate Democrats, which would be needed to overcome universal Republican opposition. Biden, an institutionalist who had long been leery of changing the filibuster, said such Senate traditions had been “weaponized and abused.”

Renewal of the Voting Rights Act used to be routine and bipartisan. Biden’s advisers have promised that he will continue to forcefully support voting rights bills aimed at beating back restrictive voting measures passed through Republican-led statehouses across the country.

Response: Republicans have argued that Democrats are exaggerating the impact of the new voting restrictions in order to justify a blatant power grab.