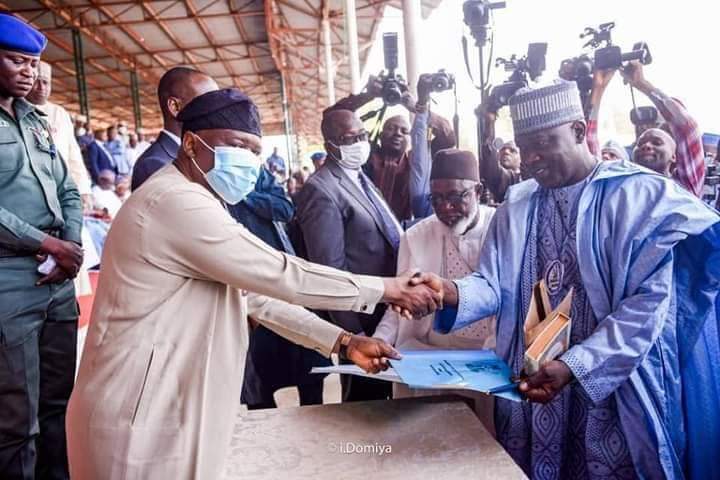 By Muhammad B Muhammad

The caretaker chairmen will serve for the period of three months as the State Independent Electoral Commission has since scheduled April 2022 for the conduct of another round of local government elections.

Speaking at the event held at Mahmud Ribadu Square, Yola, Governor Fintiri congratulated the newly constituted caretaker chairmen and assured them of government support towards carrying out their responsibilities.

Fintiri said his administration has changed the narratives across the state. He urged the chairmen to translate same at local governments level for development to thrive.

The governor advised the inaugurated to work with the party leaders and carry all people along so as to strengthen the People’s Democratic Party, PDP, before the next local government election.

Fintiri reassured that his administration would continue to do its best to deploy infrastructure and other developments at local governments level.

He called on party leaders and stakeholders to field in best candidates that would give PDP victory in the forthcoming local council elections.

The State Chairman of PDP, Barrister Tahir Shehu urged the new council chairmen to synergize with the party and other political appointees for the benefit of the masses.

In his vote of thanks on behalf of the newly constituted caretaker committee chairmen, Abubakar Abba Tahir, PhD, the KaaKaaKey Fombina from Yola South assured their readiness for the taxing task.

KaaKaaKey pledged to be foot ambassadors of the governor for sustainable human development at the grassroots and fasten their seatbelts to be the best set of local council chairmen in the state.

The Attorney General and Commissioner of Justice, Barrister Afraimu Jingi admistered the oath of office and allegiance on the caretaker committee chairmen.