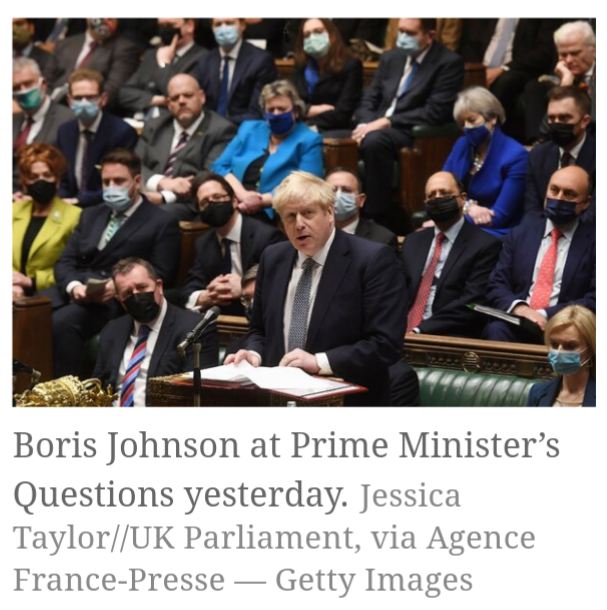 Boris Johnson, the British prime minister, is under growing pressure to resign after a public backlash over a Downing Street garden party he attended last year while his country was under a strict coronavirus lockdown. Johnson, who had not previously admitted to being at the event, offered a contrite apology to fellow Britons during Prime Minister’s Questions yesterday.

“I want to apologize,” he said. “I know the rage they feel with me and with the government I lead, when they think in Downing Street itself the rules are not being properly followed by the people who make the rules.”

He insisted that he had thought the gathering was a work event that did not breach government regulations — a claim that provoked incredulity among critics.

Top officials of the opposition Labour Party were scathing as they called for his resignation. “The party is over, prime minister,” Labour’s leader, Keir Starmer, declared.

“The only question is: ‘Will the British public kick him out? Will his party kick him out? Or will he do the decent thing and resign?’”

Conservative backbenchers now fear a public backlash, and an internal investigation is ongoing.

Backlash: Roger Gale, a Conservative lawmaker and a vocal critic of Johnson’s, told the BBC that the prime minister had misled Parliament and was “politically a dead man walking.”

The leader of the Scottish Conservatives, Douglas Ross, also called on Johnson to stand aside.