IS THE KILLING OF KIDS AND UNARMED MOTHERS AT DOWAYA, OTHERS, A CLASH BETWEEN FARMERS AND HERDSMEN? By Adamu MuhammadDodo 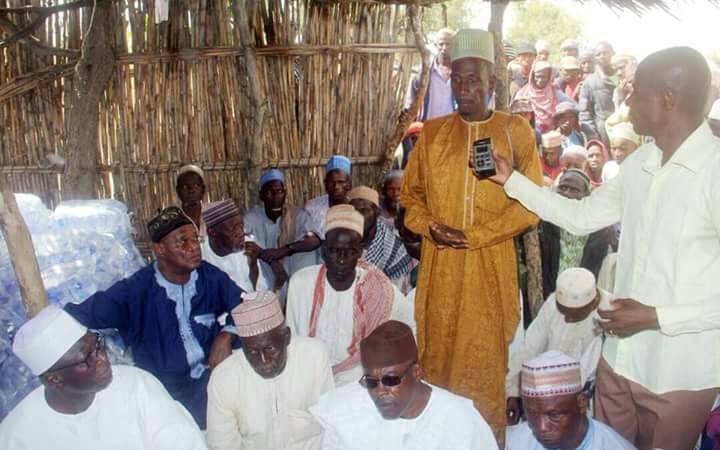 IS THE KILLING OF KIDS AND UNARMED MOTHERS AT DOWAYA, OTHERS, A CLASH BETWEEN FARMERS AND HERDSMEN?

Reacting to the call on the government by the Muslim Council Adamawa state in joining the popular call the world over, to fish out the criminal militiamen and accomplice from among the Bachama tribe, who maimed and gruesomely murdered neonates and unarmed mothers in at Dowaya among three villages in Numan last week, the PENE DA BWATIYE group has in a press release signed by Chief H.O Tadouno its national president, claimed that the killing was owing to a clash between farmers and herdsmen rather than Nazi-a-sa-tion of the Fulani race. 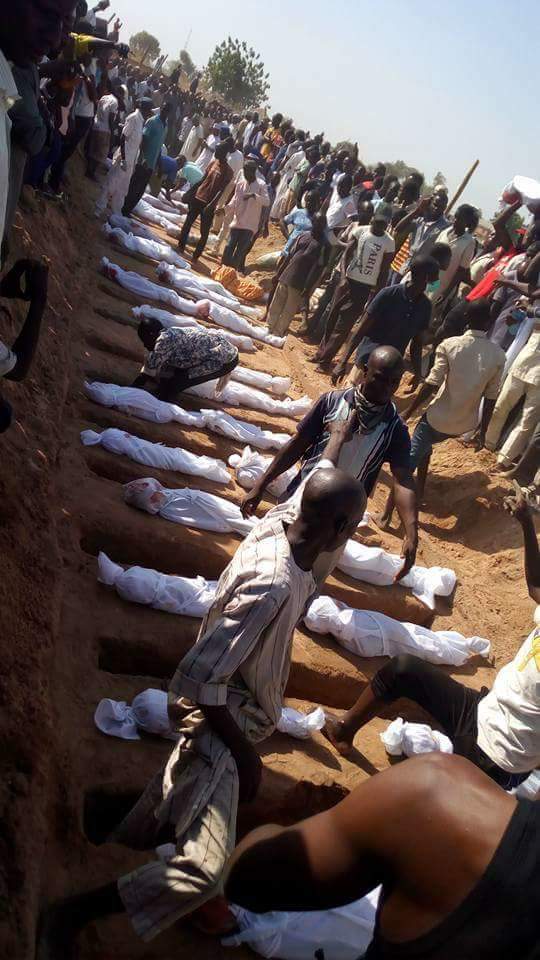 The press release gave instances of farmer-herdsmen (Fulani)  clashes in Nigeria without any mention of the Mambilla genocide, which was described as worse than Boko Haram,

Could the Numan Genocide be said to have followed the lead from Mambilla genocide against Fulani?

One wonders why the press release linked the Fulani with the Boko Haram and failed short of explaining the previous atrocities visited on the Hausa community in Numan. It could be recalled that so many lives and properties were lost.

Is it not a divided and oppress kind of strategy to say that there have been cordial relationship with the Hausa “settlers” in Numan when there has never been any distinction by the understanding of other tribes between Hausa and Fulani, hence the Hausa/Fulani categorisation? Jump that.

“The so-called press release signed by Tadouno, in defence of criminal gangs, was a mere mumble jumble, kind of hullaballoo. If anything, it intended to divert attention from the criminality of his tribesmen against the peace loving Fulani who are seen to be sinned more against than sinning, in addition to shopping for sympathy of other tribes and those who take Fulani hate speech as a theology to evangelise.

“The so-called press release, instead of addressing issue at hand, went into propaganda; do you call the killing of helpless and defenceless kids and unarmed mothers a clash in their houses not at war front a clash between famers and herdsmen?

In the said villages, the herdsmen are also farmers known for living in peace as it is evidenced in their cordial relationship with the village head. In fact, even the CAN Adamawa chapter, has joined in condemning the wanton murder as irreligious savagery and that the culprits must be fished out irrespective of the tribe and religious background to be brought to book, to serve as a lesson,” a member of the Muslim Council Adamawa state was heard to have said. 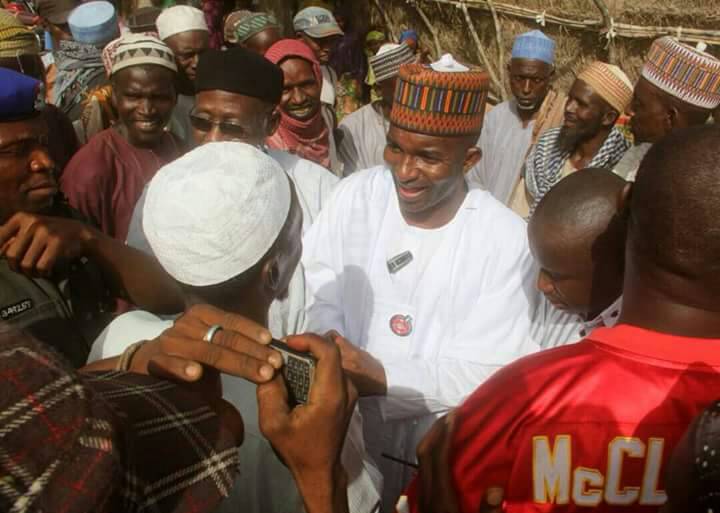 The herdsmen were also farmers in the three villages in Numan; they were either grazing with their herds or harvesting their farm produce away from their huts, when the militiamen from the Bachama tribe, claiming ownership of the land for which they were said to have issued a threat warning against the herdsmen to stay away from, visited.

“We asked you to leave our land, you are however stubborn to the warning, we are left with no option than for you to suffer the consequence,” one of the militiamen would say as a Fulani woman from among the wives and mothers of the herdsmen who was bleeding profusely, resulting from the injuries she has sustained while trying however in vain to shield her neonate from the machete of the militiamen on rather savage and barbaric mission, was heard to have painfully revealed. Her child was among the innocent homely little kids who knew no evil and the account for why they were slaughtered with hideous rather heinous cruelty, could not get to be established. Could the woman survived from the trauma and the injuries she has sustained?

Trouble started when one of the herdsmen took his herds to the stream; one of the stationed militiamen who tried to deny the herdsman and his cattle from taking water said the stream was not meant for either the herdsmen or their herds of cattle, they could therefore not drink.

The herdsman whose herds have been benefitting for so long from the stream could not fathom the reason behind the threat; he insisted that his cattle must quench their thirsts from the stream.

Little the herdsman did know that it was a scripted scheme; there was the reinforcement of the militiamen who eventually overpowered him; they did not only denied the cattle from taking water they took away the entire herds, perhaps as booty.

Only the sick, the women and the children from among the herdsmen were left at home; the husbands and fathers were either at farmlands for harvest or guiding their herds of cattle where they could graze. The militiamen were aware of that, it was said to be part of the script. They went with guns, knives machete, clubs and other rather traditional weapons meant for annihilation.

“We warned you to leave our land; your parents and husbands prove stubborn. By the time they return back to see you are all dead; killed by us, they will know the consequences of their stubbornness.

That was how the Bachama Militiamen descended on the innocent kids and mothers simply because they were Fullani as has been recounted. 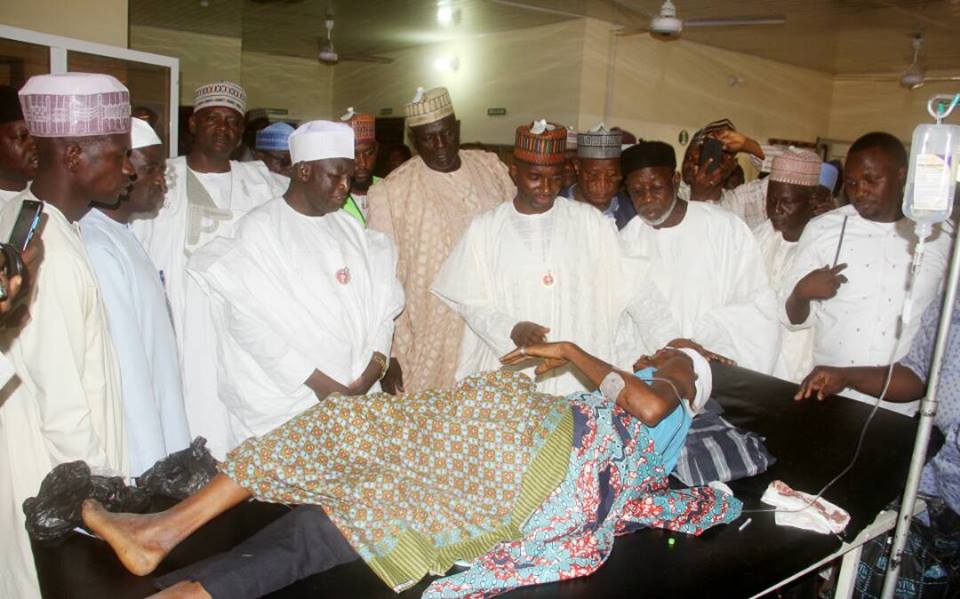 Sen. Abdulaziz Nyako and Sen. MoAllahyidi paid a condolence visit to the fulbe community visited by the tragedy at Dowaya village in Numan. They carried along with them trucks of food items and other commodities after having visited the casualties of the barbaric attack receiving treatment at specialist hospital and FMC Yola, where the duo donated hundreds of thousands worth of medical items for the continued treatment of the victims of barbarity.

Even though there’s a general hospital in Numan and in spite of the proximity, the Fulani would rather take their victims to Yola for treatment; “This is because our conscience would not be comfortable with the trust that our patients could get proper medical attention. This people hate beyond imagination,” one of the herdsmen was quoted to have said.

The chairman Miyetti Allah in Numan said that they reported the warning threats issued from the Traditional Royal Palace and the Numan militiamen that they should vacate from where they were known to be staying for so long or else the Bachama youth would be sent to them to transport them to permanent home great beyond, several times, in spite of the complaints, they could however not get to be provided with security. The village head was said to have assured them of their safety and that they should ignore the threat. They trusted his judgment. “However, the threat appeared to be real with the gruesome murder of our unarmed children.”

The senators, joining HRH the Sultan of Sokoto with HRH the Amir of Kano, urged government to bring the race of savages to book, in addition to ensuring the recovery of the herds of cattle rustled by the criminal gangs.

The Adamawa state Muslim Council and the Christian Association of Nigeria Adamawa state were said to be at one in condemning the act of savagery known only to be committed by the evil minded. The world has equally condemned the act of barbarity, which by slight comparison, was worse than Boko Harama savagery and typical to the Mambilla onslaught. Therefore, the criminals must be brought to book.

However, a group in complacency to the crime claimed that it was a farmer-herder clash, even when those maimed and killed were unarmed neonates and mothers. Some among the criminal gangs argued that their act was but a reprisal attack, even when the community of the Fulani has got no record of any violence or confrontation with any tribe around that area.

Governor Bindow of Adamawa state was said to have visited the casualties taken to specialist hospital Yola where he sued for peace after having given directives that the victims of the criminality receiving treatment at the health facility should not be charged any fee.

However, the Fulani were quoted as saying that peace is negotiated when the community admits by exposing the criminals and their accomplice to face the law, to return back the their herds of cattle and to agree to the terms of compensation in addition understanding the fact that Nigeria is for Nigerians, hence Fulani should not be treated as foreigners.

The PERISCOPE Investigate could however reveal that so many people are running away from Numan to Yola and perhaps beyond for fear of reprisal attack by the herdsmen who are rumoured to be getting set for the real clash. Something must be done proactively too to broker peace.

The herdsmen would say that they were in the affected community to mourn over the death of the wives and children of their family and friends who were killed by criminal gangs with hideous cruelty for which those who were accomplice to the crime remained unremorseful with no arrest of any of the criminals or their accomplice one week after the barbarity other than hate speeches in justification of the crime with addition to the attempted arrest of those Fulani  men who lost their relatives to the atrocity; “doesn’t it amount to insult upon injury? A herdsman remarked.