In This Government, Transparency Or Corruption, Is Zero Level – Bindow

* No Transparency, No Corruption In Governance! – Political Analyst 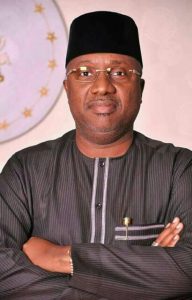 Someone I could not tell who but certainly, one who conceived that Bindow was the best Adamawa could ever be blessed to have as a governor, even though the principal could be championing a move to weed the intellectuals “‘yan Boko” away from governance by paradoxically, deploying the services of some of the ‘yan bokos for a scheme to eventually turn against them, shared a ATV Yola’s 2,6 news report, more of a PR, aimed however, at marketing, to bring back Bindow in 2019.

“No doubt, Adamawa has every reason to once again support the governor to continue with the good work,” the news report concluded.

The lad or lady could be interpreting the Periscope Global Publishers reports as tough, without prior consideration of whether or not the criticisms of the government were constructive.

I however promised a deconstruction, a kind of non romantic view, while having the somewhat political report, rather romantic news review, published free of charge.

The Periscope global publishers – both the mainstream weekly and online publication – has never requested the government of Adamawa for payment of any kind of publication of its activities because, the latter is either yet to come out of financial recession or there has been misappropriation of public funds, such that public workers with LGAs, those with the primary healthcare centres, the medical doctors recently said to be employed by the health service management board of the state, the pensioners, the list could go on an on, are yet to be paid their outstanding salaries and other entitlements arrears, in spite of the bailouts and the Paris Club refund funds.

The counterpart fund, as was insinuated, could not get to be generated, even with the improved revenue drive, to be able to access the UBEC fund.

Therefore, the Periscope Global Publishers, generously resolved to cover by exposing, to report and reveal by capturing the government’s mood of the moment, without any prompting, as gratification is ethically criminal, without also any anticipation of commendation because, fair reportage, for the most part, seems to be displeasing to the subject of inquiry “thingified” by its inadequacies and imprisoned by ineptitude.

Lest I forget, last year, Adamawa Television Corporation ATV Yola, celebrated a 30th anniversary with its establishment. The television station that excelled with its exhaled rather, inexhaustible slogan of excellence.

I was part of the ATV Yola’s success story, having worked with the station as a volunteer professional for over two years without any allowance, from 2000 to 2003.

However, the most salient highlight of the anniversary, in my opinion, that earned governor Bindow a somewhat invisible ovation and comments of commendation was the recommendation of employment waiver, granted to the management of ATV Yola to regularise, convert by means of employing the artists and the volunteer staff whose contributions were certified by the public and the management of the television station, as worthy of commendation and employment.

However, the employment waiver, the Periscope Global Publishers would investigate, was yet to take effect one year after,

ABC Yola that was blessed with the similar employment waiver, was said to have received the signal for the waiver to take effect. It simply did employ new staff.

The question that is remained to be asked is, what went afoul with the ATV Yola’s employment waiver?

Employing the committed youth in ATV Yola, is in my judgement, worthier than employing SAs for the undefined allowances.

It would be of great benefit for the SAs, if they should be introduced into the technical skills acquisition schemes.

The news report below, would not blow the balloon leading to that angle for a slightest clue either.

It could be a human angle reminding the principal about the presumed forgotten obligation, as much as it could be declared a taboo, taking a political angle, marketing Emmanuel Bello or Ahmadu Fintiri or Abdul Aziz Nyako or Nuhu Ribadu and/or Dr. Mahmood Halilu Ahmad Modi, at whatever amount, on ATV Yola, for a new beginning as could be free from any fee, relating to the political news for marketing “continuity” as that sent to me via WhatsApp below.

It has been three years, the Muhammadu Jibrilla Administration continues to follow strictly, to the implementation of plan to improve on the various faced of developments, ranging infrastructure, agriculture, health, education and economic reform.

The state has now changed away from its bondage of underdevelopment.

For instance, it’s approach to health issues, which sought the renovations and constructions like Mubi general hospital, Ganye, Maiha, Numan as well as the specialist hospital in Yola as added to the rapt attention, primary healthcare agencies across the 22 wards of the state, which function 24 hours.

The development has greatly reduced spread of ailments, thus reducing maternal mortality and morbidity, placing Adamawa on the list across the country.

It is no longer news that Muhammad Umar Jubrilla has made its impact felt at 17 out of 21 LGAs who witnessed robust infrastructural drive, with over 379 new roads as well as several bridges constructed.

In Yola north and south alone, 117 kilometers roads were either constructed, reconstructed or rehabilitated, while rural areas like… Kiri-Shelleng road is gradually coming to an end.

“I just managed, prudently, with what I have.

“In this government, in terms of transparency or corruption, is zero level

“God has given me the opportunity that is very rare. I’m managing four million people.

“Is not because of my knowledge or anything that I have extra than any human being.

“Is just God has ordained me to be in this position. So is an opportunity to serve, “Bindow said.

Farmers and farming activities had also received a boost.

The procurement of over 150 tractors, distributed across Adamawa with prompt procurement of fertilizer every farming season. This has greatly improved yield.

On education, selected secondary schools were renovated to make learning process conducive for students, while relevant books and teaching materials were purchased and distributed to all the schools.

“You can see and can report… over 3000 bedding materials and other implements for the school,” Bindow said at a selected school the procured educational materials were presented.

And with the systematic approach to block leakages, which hitherto existing among those managing state finances, the revenue drives of Adamawa has now improved from from less than three hundred million naira a month to one billion naira.

“In this government, in terms of transparency or corruption, zero level,” Bindow said.

No doubt, Adamawa has every reason to once again support the governor to continue with the good work.

In another vein, an official in Adamawa government, argued that governor Bindow constructed 397 roads in 16 LGAs of the state. Reconstructed and rehabilitated 7 general hospital two of which were hitherto burnt down completely by Boko Haram. Revived 403 primary healthcare centres and over 400 hundred schools.

The achievements ought to have earned Bindow either the PMB like unopposed ticket for continuity with the change or a work over during the APC gubernatorial primaries.

However, governor Bindow has had tough challenge such that the party primaries would have to go rough as was alleged, that the contenders; Modi and Ribadu, would have to appeal to the national leadership of the APC, to nullify the election and to disqualify the purported winner, due to the way and manner in which the primary election was conducted. Alleging that the whole exercise has grossly violated the genuine guidelines. Therefore, it should be cancelled in the interest of justice, internal democracy and the progress of APC.

“If the process was genuine, we’ll be left with not option but to receive the outcome of the gubernatorial primaries in Adamawa.

“However, the process was fraudulent. The electoral committee comprised irregularities in a manner that results were announced where either a kind of kangaroo elections were nocturnally conducted or elections were never conducted at all,” a political analyst observed.

“The fraudulent manner in which the governor tolerated the conduct of the gubernatorial primaries to his favour, is metaphoric of the way he conducts his leadership; zero tolerance to transparency and corruption lacks any definition, other than zero.

“You talk of zero corruption when due process by contract and procurement standards, were not taken into consideration in awarding any of the said executed projects in Adamawa state.

“But for The initiatives of Dr. Abdullahi Dauda Belel the chairman Adamawa state healthcare development agency and the intervention of the World Health Organisation, primary healthcare in the state would have been in sorry state.

“Do you know that the money that accompanied the second best award in the federation won by the Adamawa state primary healthcare agency would have been used to offset some of the outstanding salaries of the primary healthcare workers? Don’t ask me where the money was diverted. Do you job to find out.

“Adamawa is indeed in financial quagmire with the alleged unaccounted for loan and there’s very little to show of how the loan was utilised,” a political analyst argued.

A reader asked why the Periscope Global Publishers hate Bindow?

We record activities. We don’t hate anybody.

Like Obama would say, he’s for everybody and for nobody.

We can’t say leadership is effective when it’s actually clueless.

When parents can’t pay school fees of their children, can’t put the hospital bills and can’t feed their families because, they are recklessly been denied salaries and pensions for some months, in spite of the bailouts and the Paris Club refund funds.

We can’t say there’s water everywhere, which ought to be but it isn’t the case.

We can’t say rule of law is being adhered to, when court order isn’t honoured.

You could go on and on.

Unless otherwise, you want us to degenerate into sycophancy or any form of dementia.

Mind you. We only report, we do not make news.

We help in strengthening the truth, lest our community reduced into the republic of liars as creatively articulated by Wole Soyinka in his “InterInventions: Between Defective Memory and the Public Lie – A Personal Odyssey in the Republic of Liars.”

A most read, if you asked me. Peace!

FG To Enforce No Work No Pay On Workers Strike