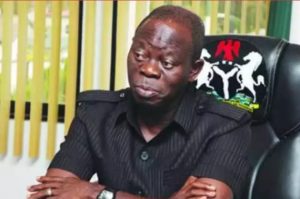 Information reaching the PoliticsNGR newsdesk reveals that the national chairman of the ruling All Progressives Congress, APC, Adams Oshiomhole was briefly detained by the Department of state Security Services, DSS on Sunday.

According to Cable, Oshiomhole was grilled by DSS operatives for nine hours after some APC governors alleged that he received bribes during the party’s primary elections across the country.

He was also pressured to resign during interrogation by the DSS.

Oshiomhole refused, highlighting that he would only do so if he lost the confidence of President Muhammadu Buhari.

The APC chairman told the DSS that the president was in the loop of every action he took during the party’s primaries.

“Adams Oshiomhole was arrested by the DSS, they didn’t show him any petition. It was alleged by some governors that he collected bribe during the primaries,” a source said.

“He was told to resign and he told DSS operatives that he would resign if he lost the confidence of the president. He said everything the party did, he (Buhari) was in the know.”

Another source said the president expressed shock at the governors’ move, saying he was not aware of the development.

“On Monday night Oshiomhole met with the president and briefed him on what happened and the president was shocked. The president said he did not know about it and promised to look into it,” the source said.

The APC primaries were marred by controversies. Elections in some states had to be repeated

However, APC has issued a statement saying their chairman, Adams Oshiomole was not arrested or detained for hours by the DSS.

“Chairman is out of the country as far as I know. We cannot conform or deny the story “,