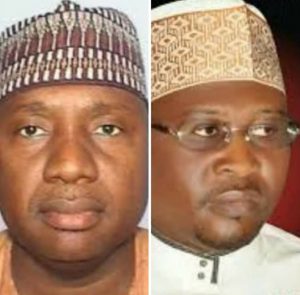 * Which Regimes? Fintiri has not left any unpaid salary – PDP Stalwart

* One promise too many, yet unfulfilled in spite of the means not beyond the reach – Political Analyst

Governor Muhammadu Umaru Jibrilla Bindow of Adamawa state might have been threatened by Fintiri’s effrontery on the issue of the outstanding salary arrears of public servants in the state.

Rt Hon Ahmadu Fintiri the former acting governor, former speaker of Adamawa state house of assembly and the present PDP gubernatorial aspirant who was being referred to as ATM by the civil servants in Adamawa, was said to have challenged Bindow to submit to his inefficiency and the lack of financial discipline, lest he sunk the state into the ocean of uncalled for debts in the guise of settling outstanding arrears of salaries.

Workers who jubilated over the payments of two months outstanding salaries owed to Nyako government resulting from what political analysts would describe as implementation of no work no pay, due to the uncalled for industrial action embarked upon by workers at the behest of the NLC state chapter leadership said, ATM machines in Adamawa used to make “Fintiri, Fintiri” onomatopoeic sounds while counting the workers’ two months old outstanding salaries that were eventually settled by Fintiri.

Bindow was reported to have said that it would be beyond ATM machine by the time workers would be receiving payments of their outstanding salary arrears anytime soon.

The newshawk would report Bindow as making another rather once too often repeated promise to offset the outstanding, seven months salary arrears of local government workers, primary health workers and primary school teachers before Christmas.

Bindow was quoted to have made the promise at the official inauguration of Adamawa Central Zone of Buhari/Bindow Reelection Campaign Committees in Yola, Monday.

The Newshawk would report that governor Bindow has previously made botched promises to offset salary arreas in the past, which he failed to accomplish despite collecting huge amounts of handouts from the federal government including the bailouts and the Paris Club refund funds.

Bindow has, in July last year, made a promise to offset the backlog of outstanding salaries of local government workers after which it would appear, as the Newshawk has gathered that the governor was economical with the truth telling President Muhammadu Buhari, during the anti corruption summit that he had settled all outstanding salaries owed to the state.

Bindow, the Newshawk would analyse, made another promise during the commissioning of a capital project at the main campus of Adamawa State Polytechnic, stating that he “would like to put it catigorically that, in the next one week, teachers’ outstanding salary arrears will be a thing of the past in the state.

“This administration have never at any time, refused to pay salaries of civil servants in the state. Let me appreciate federal government intervention support to higher institutions, through TETFUND, in promoting standard of education in the country,” he said.

There was however, a growing concern in the public sector over the failure of the state government to offset the outstanding salaries of various classes of workers despite accessing a loan of N5b recently.

Workers with the Local government authorities, primary healthcare workers as well as primary school teachers lamented being paid one month salary only, despite collecting the said loan.

According Bindow, the renewed gesture would be aimed at ensuring a colourful Christmas festivity.

Bindow therefore, urged the Christian community to use the period and pray fervently for the unity and peaceful coexistence.

“You would start expecting your salary alert for all the outstanding arrears as from today. government have taken this bold decision for our Christian brothers and sisters to have enough money for celebration.

Bindow’s supporter was quoted to have teased a correspondent with the Periscope Global Invested that “Bindow would shame the Periscope doubting Thomas by settling outstanding salary arrears bequeathed to him by previous regimes.”

However, the claim that Bindow was bequeathed with outstanding salary arrears was said to have been duly challenged by Rt. Hon. Umaru Fintiri PDP gubernatorial aspirant as obnoxious falsification of facts a propaganda because he was able to settle all the outstanding salaries of civil servants in the state in his capacity as the then acting governor.

Social commentators have equally argued, defining the scenario as typifying Wole Soyinka’s title of a book in his InterInvention series: “Between Defective memory and the Public lies”

A literary critic would articulate Bindow’s as one promise too many yet unfulfilled, in spite of the means not beyond the reach

“We’re tired of deception occasioned by public lies, we want action in implementation,” a seeming famished local government worker, close to retirement age who has got a farm, whose children couldn’t get to further their education, with poor background in any skills acquisition for self-reliance, would say.