Bindow, Nyako Others Fail To Sign Adamawa gubernatorial Peace Accord 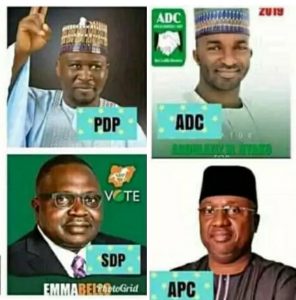 Two front line candidates in the upcoming gubernatorial election in Adamawa state: governor Muhammadu Umaru Jibrilla Bindow of the ruling APC, and Senator Abdulaziz Nyako of ADC were among the thirteen gubernatorial aspirants who did not sign the peace accord administered by the Interagency Consultative Committee on Electoral Security (ICCES) to ensure peaceful conduct of the 2019 polls in the state.

Governor Bindow has sent a proxy in the person of the SSG, Umar Bindir to sign the accord on his behalf while Nyako sent in his running mate in the person of Lazarus Micheal to represent him.

Both the representatives were prevented from signing the document as it was insisted that the rule stipulated that only candidates of political parties could sign the document as the terms of the signing of the accord disqualified a representative from signing for his principal but provided room for the principal to sign the accord at a later date.

The resident electoral commissioner had in his introductory remark, explained that the peace accord was intended to assure a violence-free electoral process and urged the governorship candidates to stick to the requirements of the accord.

As enumerated by the commissioner of police, the peace accord required the governorship candidates to embrace the spirit of sportsmanship, to avoid winner-takes-all mindset, to shun hate speech, to shun violence, to discourage supporters from violent acts, and to say no to abuse of youths.

Bindow’s major rivals, and candidates of PDP and SDP Ahmadu Umaru Fintiri and Emmanuel Bello respectively, have however signed the document having personally participated in the peace mission.

Commenting on the absence of governor Bindow shortly after signing the peace accord, Fintiri said the fear of defeat ahead of 2019 must have made the governor to develop a phobia, adding that the defeat of Bindow come 2019 was a fait accompli.