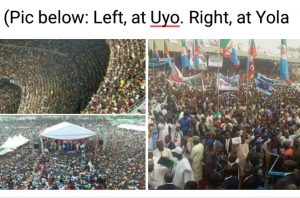 * I’ll not be engaged in campaign, I’ll only thank the people of Adamawa state – Bindow

* The entertainers from Kannywood, rather than endorsed, only played what they were paid for – Literary Critic

* Bindow ought to have used the funds spent on Kannywood actors, musicians and hired crowd for payment of our scholarship – Moses

Eldee in Abuja bursted out with laughter when a Bindow apologist equated the crowd of seeming sponsored supporters from the local government areas of Adamawa state and the fans of the Kannywood stars at Ribadu Square, in Yola for the APC Bindow gubernatorial flag off campaign, with the congress of Nigerians of good conscience, in solidarity to President Muhammadu Buhari for continuity, at Uyo during the APC presidential campaign.

Eldee simply defined the comparison as a byproduct of deceptive and defective hyperbole, born out of either desperation or jaundiced knowledge.

The Ribadu square function, Tuesday was considered as a crowd of apparent deception:

“People as much as vehicles to convey them from their local government areas, were paid for participation as much as the Kannywood stars who wouldn’t be in Yola if they were not paid for entertainment endorsing Bindow. Why were they at Ribadu Square? They were hired. However, miserably, to be there,” a literary critic would observe.

The Newshawk Investigate revealed that, as a strategy of mass public mobilization, and crowd gathering, Adamawa government has invited a handful of Nollywood, Kannywood actors and actresses as well as top Hausa musicians to add entertainment colour to APC Bindow’s gubernatorial campaign flag off at Ribadu square. The invitation has cost the state tax payers money running into tens of Millions of naira.

The Newshawk has however observed that despite the huge resources spent on the entertainers –
which would have been more than enough to pay scholarship of indigenes of Adamawa state studying in tertiary institutions across the country – the turnout seemingly, did not impress the visiting national chairman of the party, Adams Oshiomhole.

Moses, an indigene of Adamawa, Abuja based student unionist, lamented that they were made to purchase scholarship forms, which ought to have been given to students free of charge, at the cost of N500 each, thinking and as they were deceived to, that it would not be long after the submission of the N500 worth form, that they would start enjoying the payment of scholarship.

Some of them, hardly eat even once a day on campus, couldn’t help but to borrow the N500 for the scholarship form. Moses lamented.

Recall that the leadership of the Adamawa state student union lamented that over 25, 000 students bought the scholarship form making the total of over N25m generated, which could go for deceptive extortion.

“It seems like the government of Adamawa values entertainment than education,” Moses lamented.

A pensioner pointed out that he has been retired five years ago. However, nothing was said about his gratuity among other benefits.

“That’s how we’re repaid as a price for joining civil service in Adamawa state. I’m however too old to take a contract, joining the Kannywood industry,” a pensioner lamented.

Political analysts who hitherto commended governor Bindow for saying that he would not engage himself in any campaign, he would rather pay a thank you visit to the people of Adamawa, were working on the reshaping of their analysis to be in commensurability with the APC Bindow’s gubernatorial flag off campaign and/or whether or not there would be a campaign train that would carry governor Bindow to reach out to the electorates across the LGAs

Meanwhile, the electorates who would not be hoodwinked, spread across the entire local government areas of the state said, PVC would be their metaphoric mouthpiece in few days to come.