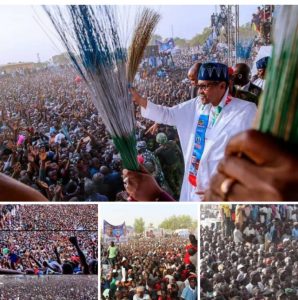 “Buhari is just a phenomenon. He doesn’t wear any amulet, he doesn’t use any charm or consult any Babalawo or voodoo or rely on the Bori mediumship or any shrinic manipulations to go diabolical; wearing silk “shirk shirt” in incantation for success and to be accepted”

President Muhammadu Buhari’s APC presidential rally, Thursday in Yola, joining other states held, has attracted mammoth crowd of supporters, the majority of whom were the electorates.

Asked whether or not it was a paid crowd, the over one hundred electorates responded to the Periscope Global political desk at HRH the Lamido Adamawa Palace and Mahmud Ribadu Square the venue of the rally that neither Buhari nor APC, has the financial capacity to bring the amazing number of people lined up from the Yola International Airport to Lamido palace in Yola and to Mahmud Ribadu Square and to do same across the 36 states of the country.

“Buhari is just a phenomenon. He doesn’t wear any amulet, he doesn’t use any charm or consult any Babalawo or voodoo or rely on the Bori mediumship or any shrinic manipulations to go diabolical; wearing silk “shirk shirt” in incantation for success and to be accepted.

“President Muhammadu Buhari’s personality, integrity, sacrifices, sympathy, empathy and mercy for the led and good leadership, in addition to submitting to God most gracious, are, to our understanding, his charms, his amulet and his faith,” one of the electorates, remarked, the teeming number behind him echoed “yes!” in chorus.

There were some exited group who could only speak fulfulde. They were from the northern Cameroon, they said and visited Adamawa Nigeria, just to physically see Buhari even at distance and to celebrate with the electorates, the coming of icon of untainted integrity to Yola on Thursday, “it’s our thirst and an accomplished task,” they said.

One of President Muhammadu Buhari’s supporters spoke with the Periscope Investigate, responding to allegation that the Adamawa government was alleged to have deducted some amount of money from the salaries of the civil servants with the state to promote President Muhammadu Buhari’s presidential campaign rally in Yola. He said it was laughable as same would have applied to the entire 36 states of the federation.

“This allegation is libellous, motivated by political desperation. However, if it isn’t malicious, the shortchanged workforce should find out from the state government and perhaps, the labour union leaders, what happened with, if actually there was the deduction,” the politician said.

Recall that the Periscope Global and the Newshawk Online media, have on January 17, projected the would be poor turn out for the APC gubernatorial Flag off campaign in Yola, Adamawa state, without the presence of President Muhammadu Buhari.

Recall that as projected, the Periscope Global and the Newshawk Online in their January, 2019 publications, reported how low-keyed the turn out of electorates at the APC gubernatorial flag off campaign, held on January 18, 2019. It reads in part:

“Muhammadu Umaru Jibrill Bindow’s gubernatorial campaign was marred by low turn out amidst failure of a large section of party stalwarts to grace the event.

“Investigation by this medium indicated that, as a strategy for mass public mobilisation, the Adamawa government has, three days to the flag off campaign, invited a handful of Nollywood, Kannywood actors and actresses as well as top Hausa musicians. The invitation was said to have consumed the tax payers money running into Millions of naira.

“Others are the ace APC musician, Dauda Kahutu popularly called Rarara, Kumurchi, Nonso Diobi, Baba Ari, and a host of others.

“However, in spite of such huge expenditure, the turn out seemingly did not impress the visiting national chairman of the party, Adams Oshiomhole who during his speech indicated that only a fraction of the congregation were in the arena as more than twice the number were outside the venue, as a way of reassuring the people that APC was firmly rooted in the state.

“Some youths interviewed at the venue, said that they attended the ceremony not necessarily because they were enthusiastic Bindow supporters but as a way to catch a glimpse of their favourite superstars.

“A Kannywood fan who identified herself simply as Rabi, said she graced the event to have a one on one contact with her screen idols, like Ali Nuhu, Kumurchi and the others.

“Newshawk has also observed that mainstream APC stakeholders in the state, including those that aspired for the ticket of the party alongside Bindow, were conspicuously absent at the flag off campaign, further indicating that the raging and intractable internal party impasse was yet over.

“Among those who did not honour the flag off were, Mallam Nuhu Ribadu who was recently appointed as the director, field operations of the Buhar campaign Council, Buba Marwa the exmilitary administrator of Lagos state who was also recently appointed as the chairman, Presidential Advisory Committee on Elimination of Drug Abuse, Engineer Markus Gundiri, Alhaji Sadiq Muhammadu (Walin Ganye), Senator Abubakar Girei to mention but few.

It was not a crowd attracted by Kannywood stars Thursday in Yola, it was an amazing gathering attracted by President Muhammadu Buhari, in company of the “who is who” in APC for the presidential campaign with the population of supporters beyond comment.

A population that revealed the truth in commensurability with the Periscope and the Newshawk reports, that in spite of the resources, either invested or wasted, the flag off of APC gubernatorial campaign was indeed low-keyed in Yola .