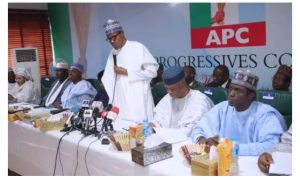 The Adamawa APC Tuesday, rejected the Thursday March 28, 2019, fixed by INEC for the gubernatorial supplementary election.

Alhaji Ahmed Lawal the APC state organising secretary reacted against the new date fixed by the INEC, Tuesday while speaking to Journalists in Yola that APC was not consulted before fixing the new date for the rerun election, alleging that rumors had filtered earlier that election would be held on Thursday. He wondered why the rumored date would turn be translated to reality.

“INEC failed to consult political parties involved in this election before going ahead to fix a new date for the rerun.

“We have smelt a rat due to the rumors in town earlier that rerun election would be conducted on Thursday and it turned out to be real.

“We are not afraid of rerun election but INEC should do the right things. How would you fix an election on work day?

“Are civil servants not going to participate in the election?

“We are going to forward our protest to INEC concerning the matter,” Lawal queried.

Adamawa High Court adjourned hearing for Wednesday, of a case filed against INEC for removing a logo of a political party on a gubernatorial ballot paper, praying that the entire gubernatorial election should be canceled.

Adamawa High Court picked Friday for its rulings on the case.

However, INEC seemed not to want to wait for the Friday’s ruling before conducting supplementary election, hence has fixed Thursday March 28, 2019 for the governorship rerun election without consulting the stakeholders; talking about the participating political parties.

The Periscope Global Investigate will report that while some electorates, mostly, sympathetic to PDP and other opposition parties, saw the arrangement as a welcomed development, some electorates supportive of APC the ruling party, suspected compromise on the side of INEC to shortchanged APC.

“INEC is simply comprised to disenfranchise the electorates by fixing a date only to be communicated through the media without consulting political parties. It’s technically undemocratic. It’s a ploy against the ruling party,” an electorate would exclaim.

An open letter to the Prime Minister of New Zealand