Zamfara HoS vs MAAUN: When silence is golden

Zamfara HoS vs MAAUN: When silence is golden 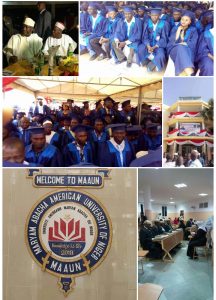 A tradition of the holy prophet of Islam, Muhammad (SAW) has abundantly enjoined Muslims against making ill informed comments especially, on subjects in which they have little or no knowledge thereof so as not to cause disaffection and chaos amongst the people.

It is with this immutable tradition in mind that I found it difficult to rationalise the intention of Zamfara Head of Service when giving out the preposterous and rather self serving directive that all Ministries, Departments and Agencies (MDAs) under Zamfara Government, should not consider certificates awarded by MAAUN Maradi, for any appointment, promotion, advancement or change of cadre.

When a man tries to arrogate to himself the authority he does not have, the result is always a huge disaster not only to himself but to others who may become victims of his deluded clamour.

But foolishly enough, after dishing out the alarming directive, the head of service did the needful by going ahead to demand the confirmation of the university’s accreditation status from the federal ministry of education.

To the chagrin of the HoS but total relief to the teeming people of Zamfara State and by extension Nigerians whom the bogey directive intended to confuse, the federal ministry of education and NUC set the records clear, affirmed the university’s accreditation status and gave it a clean bill of health in all ramifications.

The discordant actions taken by the head of service in dishing out directive before seeking explanations from the federal government smacked of deliberate mischief and crass irresponsibility that could only manifest in a society replete with lawlessness.

One can say with absolute authority that it is trite for a government official occupying a high position of responsibility such as head of service of a state to give a false alarm on an important issue that can make or mar the future of a generation.

If the head of service has cared to make a little effort to find out the true position of the university’s accreditation status, he would have saved himself, the government of Zamfara State and the totality of Zamfara people from facing a global odium and ridicule.

From all reasonable extrapolations, one can explicitly say that the action of the head of service was informed by a un-alruistic desire to subtly prevent the children of the masses from accessing a sound education without much qualms.

It is on record that students from Zamfara State formed a large bulk of the teeming beneficiaries of Maryam Abacha American University’s intervention since its inception.

I wonder how a university that has earned a place in the educational hall of fame, attain world acclaim and standards in multi layered spectra, could fail to meet the accreditation of a local champion in Zamfara State.

But it looks from all intents and purposes that the head of service was on a self delusional journey to sabotage the development of university education in the north, which was the hallmark and major preoccupation of the Maryam Abacha American University since its birth.

It is on record that hundreds of indigent students who would have found it difficult to attain university education, are now graduates courtesy of scholarships from Maryam Abacha University. Among these beneficiaries, are teeming students of Zamfara origin.

It will be apt at this juncture to educate the HoS by informing him of the excellent feats recorded by this fountain of knowledge since its sojourn in the academic arena.

It should be noted that the university has secured accreditation from the Accreditation Service for International Colleges and Universities, United Kingdom (ASIC UK).

“ASIC is one of the 12 accreditation bodies recognised by Home Office, UK, a ministerial department of the British government.”

It is also an approved accrediting body for the purposes of compliance by the UK Border Agency (UKBA) and doubles as a member of the UK National Academic Recognition Information Centre (NARIC) and Quality Standards Group, which is also a member of the British Quality Foundation (BQF).

BQF is an affiliated accreditation body of the European Association for Quality Assurance in Higher Education (ENQA Europe).

With the accreditation, MAAUN has become one of the renowned world accredited universities that can compete favourably with any university in the world.

It should also interest the HoS to note that the federal ministry of education has confirmed the accreditation status of Maryam Abacha University, Maradi, Niger Republic since 2015.

Defending the institution, the Nigerien embassy in Abuja, in a letter dated Monday, July 27, 2015, and addressed to Nigeria’s Ministry of Foreign Affairs, says the university was duly accreditted.

“The institution fulfils all required terms and regulations enforced in that country,” the embassy said.

The Nigerian education ministry has written to the Maryam Abacha University to confirm the accreditation of the school. The ministry said it worked with the NUC to resolve any issue.

The letter, presented to journalists in Abuja said that Maryam Abacha American University of Niger waas on the ministry’s list of accredited Universities.

“The University accreditation agreement was contained in the Niger ministerial order No.000241/MES/R/I/SG/DGE/DL/DES/DEPRI dated 26th November, 2013 delivered by the Diaspora, Niamey, to the Ministry of Foreign Affairs, Nigeria,” the letter stated.

Maryam Abacha American University runs undergraduate degrees in core sciences, social sciences and the arts and it is expected to graduate its first set of students in 2016.

As expected, the recent onslaught on the university by the Zamfara HoS has drawn the ire of the federal ministry of education which rebuke the HoS and apologized to the management of the institution over the embarrassment caused to it by “an ill-conceived circular written by office of the Head of Civil Service, Zamfara.”

The position was made via a letter, with reference number FME/S/174/C.2/IX/20, dated 14th March 2019 and addressed to the President Founder, MAAUN, Maradi, Republic of Niger.

The letter was signed by Mrs Giginna L. I., Education Support Services Development, Evaluation and Accreditation Division on behalf of the Minister of Education.

In its response, the Federal Ministry of Education, through a letter, with reference number FME/S/174/C.2/B/IX/19 and dated 14th March 2019, confirmed the presence of MAAUN Maradi on the ministry’s list of accredited institutions in Niger Republic.

The letter further stated that the ministry has approved the evaluation of certificates awarded by the institution for the purpose of employment, promotion, change of cadre, admission and the National Youth Serce Corps (NYSC) mobilisation in Nigeria.

The ministry then drew the attention of Zamfara government, or any other interested organisation, to avoid making hasty conclusion on matters related to recognition of foreign certificates without recourse to Federal Ministry of education.

The letter also requested Office of Head of service, Zamfara to recant publications credited to it on social media that disparaged the credibility of the MAAUN and to write apology letter to the institution to avoid diplomatic damage between the Nigeria and the Republic of Niger.

“It should be noted that there is bilateral agreement between the two countries on recognition of educational certificates awarded by either of them.

“The management of Maryam Abacha American university of Niger, Maradi, is by this development calling on all graduates and students of MAAUN to disregard any mischief against this great institution as their certificate is internationally recognized.

“MAAUN is approved and recognized by both governments of Nigeria and Niger Republic,” read the statement in part.

It is in this regard that we call on the HoS to do the needful by burying his head in shame for dishing out outright falsehood to the teeming good people of the state with an apparent mindset to deceive the unsuspecting populace.