After 7 months with salaries unpaid, the Bindow appointed from 2017 to 2019 now know their fate 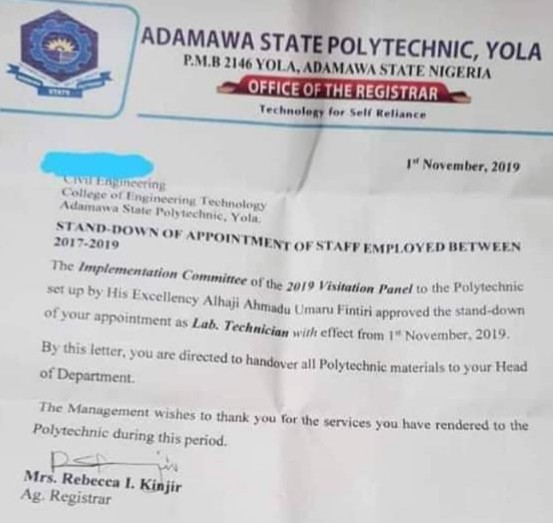 The coalition of those appointed under Bindow led government, from 2017 to 2019, which proved unacceptable by the Fintiri led government, are beginning to be served with disengagement letters Thursday, after having suffered seven months suffocation with salaries unpaid, the Periscope investigation can reveal.

Recall that some months previously, the coalition, which comprised of some staff who have worked for several years and were transferred to other departments or ministries, some of those who enjoyed salaries said to be for over two years under Bindow led government, those employed just before the gubernatorial election and those employed just before handing over the mantle of leadership to the newly elected governor, whose payment of salary was suspended for seven months, went on a peaceful rally to the Adamawa state government house and the state house of assembly to present their grievances; challenging their technical suspension.

They are Nigerian citizens, they are indigenes of Adamawa state. They should not therefore, be treated as foreigners; they exclaimed and their employments followed due process, they argued.

The group were received by the deputy governor in company of the Chief of Staff to the Governor, the SSG and the Head of Service among others, at the gate of the government house in Yola, with the assurance that the governor would respond accordingly, when he return from an official trip.

The aggrieved group waited for over a month before their fate could be translated to them.

Some of those affected by administrative error are to be reinstated, while some are simply disengaged on the ground that their employments issued by the previous government, were merely, unnecessary, a technical unwelcomed development politically.

The worst hit, is said to be the controversial employments at the Adamawa State Polytechnic SPY, Yola where seriously unquantified, have paid money ranging from N20k to N400k as was alleged, to be employed.

Currosive corruption, corroding the tertiary institution: Who decided the price? Who gave the bribe? To whom was the bribe given? Who are those joined in robbery treasury to have facilitated the issuance of bribery-induced-employment letters?

An insider has, on condition of anonymity, revealed to the Periscope reporter that employments in SPY was not only owing to bribery, there were candidates of politicians and those holding political positions in the previous government, which were facilitated by means of waiver as in other ministries and departments.

There have been insinuations that some of the salary-suspended workers, would not be reinstated on the ground that they were, for the most part, Muslims.

The allegation, though conceived in some quarters as baseles, was said to be holding strong in other quarters.

“You see, this is typical of Governor Fintiri, in spite of his “fresh air slogan,” some state civil servants will have to slug it out with suffocation; insufficient funds in spite of “Fintiri, Fintiri” onomatopoeia, as the ATMs dispense money.

“When Fintiri took over with the impeachment of governor Nyako, he disengaged the employed staff, suspended the SA beneficiaries and revoked the skills aquisition schemes as unworthy but waste of resources initiative.

“However, at the background, the suspension and withdrawals of the Nyako initiative was alleged to be owing to the impression that the majority beneficiaries were those professing the same faith with Nyako and his tribesmen.

“It was thought that governor Bindow would reinstate the disengaged employed, welcome back the SA initiative and reintroduce the skills aquisition scheme. He simply maintained the Fintiri staus quo against the Nyako’s.

“It came to pass. Now it’s history. We’re into the next book that is to present the Bindow beneficiaries, he was allegedly not to defend earlier, as the worst hit, with the same conception as previously,” a literary critic articulated.

“You guys aren’t serious. What do you expect in a Muslim majority state? There’s no obvious, if due process is to be followed, Muslim community must have the larger share of everything, not only employment.

The point isn’t that because Bindow employed Muslims. Mind you, there’re those employed from Demsa, Numan, Guyuk and Lafiya Lamorde local government areas; the axis of Christian majority in Adamawa state. So stop polarising issues based on enthno-religious sentiment,” a politician supportive of Fintiri led government remarked.

The coalition of the seven months unpaid salary state government staff, were reported to have resigned their fate faithfully to prayers for divine intervention.

“What they are being served with; either reinstated or disengaged, is a product of prayers for a blessed outcome. They should therefore, take it in good faith,” a moralist remarked.

A security conscious commentator feared that the number of those whose employments would have to be stand down, having been affected by the outcome of the screening committee, was overwhelming. It could constitute a security threat as they would have to go back to the pool of poverty breeding unemployment. “Something financially meaningful, like social welfare, will have to be considered with a view to cushioning the effect,” she would observe.

A political commentator who claimed was conversant with Nigerian law said, those who considered themselves being shortchanged by being “unduly disengaged,” should challenge the government’s action before the law.

The Nigerian Labour Congress, Adamawa State is however yet to make any statement on the development; whether or not the government’s action would warrant any resistance.

One of the letters served to a disengaged staff of SPY Yola reads thus:

The questions that are remained to be asked are:

Has this affected staff, unlike others, been enjoying salaries for the seven months under review?

Is the content of the above “Stand-down” appointment letter, the same with that of those affected; “staff employed between 2017-2019.

Will the seven months salary arrears and severance allowances be paid to the “stand-down staff.

These take another story.

Fashola says our roads are not as bad as being portrayed in the press, critics ask which road?