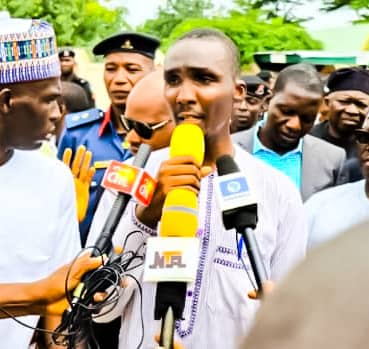 The Adamawa state civil servants whose salaries were suspended after the swearing-in of Rt Hon Ahmadu Umaru Fintiri as a governor, have given one week ultimatum, within which to pay them their outstanding salaries and to reinstate them back to work.

The group led by Faisal Baba, has in a press conference, held on Wednesday in Yola, expressed their dismay and disappoints with the way and manner, they were being treated like those without roots in the state; who were hung up to hunger and sacrificed to poverty, to die with their families or to survive being fed out of the crumbs of criminality, they would be enjoined but not enjoy to join for a disgustingly, forceful vocation.

The group lamented, they were promised that the moment the governor returned from official engagement, something positive would come out of their protest letter, which they served through the deputy governor during the 2nd October peace protest to the government house, demanding for the payments of their 6 months salaries.

In spite of the follow-ups, the group of the deprived, who were not disrespectful, were without disguise, demoralised and devastated by being disregarded, dejected, near denounced and dared not to further demand their legitimate due rather than the gesture to be kind of worthy guests to death; it was disgusting.

“No one fights a government, no one forces a government to do anything against her will,” the group leadership was warned.

The promised favourable response from the governor, turned out to be a metaphor; about 1600 workers with the state polytechnic, were said to be served with stand-down letters; “philosophising the spirit of fresh air but only suffocating deprivation and executive denial of due rights; enjoying the blessings of legislative silence and/or none said; making nonsense of our predicament,” the group leadership is quoted to have said.

The group leadership said even though the stand-down letters served to some subjectively selected staff of the state polytechnic, read to affect only those staff employed between 2017 to 2019, there were however, those who have been working since 2016 and even beyond that we’re being affected by the lay-offs; instead of being served the confirmation of permanent and pensionable appointment letters.

The group also observed that while there were some selected based on interest staff who were employed within the bracket under review and were not affected by the stand-down, there were those with master degrees and second class upper credits who were sent back to labour market because their faces looked politically and perhaps ethnically, ugly in the state the beauty of which lies in its unity in diversity. This could constitute security threat.

The group said they took their grievances for arbitration, as peaceful and law abiding citizens, to the Deputy Governor, the SSG, the HCS, the traditional authorities, the religious leaders of the Muslim Council and Christian Association of Nigeria; most of the groups however told them to patient, pending the outcome of the panel committee constituted by the Fintiri led government, to decide the compass.

The group lamented that the NLC state leadership, has technically, played the bourgeois modernist escapist, backsliding to betray the group as if the salaries suspended workers were nonmembers who have not been paying monthly dues; extorted directly from the salary source; a painted scenario, typifying Sembène Ousmane “God’s Bits of Wood”

“God’s Bits of Wood,” Wikipedia explains, is a 1960 novel by the Senegalese author Ousmane Sembène that concerns a railroad strike in colonial Senegal of the 1940s. It was written in French under the title Les bouts de bois de Dieu. The book deals with several ways that the Senegalese and Malians responded to colonialism.

The group also appealed for the intervention of His Excellency President Muhammadu Buhari, Her Excellency the first lady Dr. Aisha Muhammadu Buhari, the SGF Boss Mustapha, the lawmakers with the National Assembly from Adamawa state, the PDP National Chairman, the former Vice President Atiku Abubakar Waziri Adamawa, the former governors of Adamawa state, the human right activists and the entire stakeholders in Adamawa state and beyond, to rescue the workers from being sent to grave by poverty and hunger, resulting from the state government’s denial to pay their salaries for seven months.

The group said they would finally, register their grievances for divine intervention through prayers (Al-Qunut).

When asked, now that Governor Fintiri said he was not aware of the sacking of workers at the SPY, assuring it with the suspension of step-down exercise and directed for thorough, unbiased screening, has the group equally suspended it’s ultimatum with Monday as dateline?

Faisal Baba the leader of the group responded to the Periscope reporter that “if the governor was not aware of the selective sackings of staff at the Adamawa State Polytechnic, then we have to suggest that he sacked the management of SPY for the high profiled gross executive insubordination; interpreted as serious misconduct in civil service.

“We should also have to ask that if the governor was not aware of the selective sackings, is he also not aware that we’re not been paid our salaries for seven months, we’re now half way to eight months under his government?

“We however, thank those who intervened to make the governor see reasons in suspending the sacking of the selected workers in SPY, which we believe, it is not at all, the influence of the NLC, not also the NUJ leadership that technically denied us the use of NUJ hall for our press conference.

“Governor Fintiri should also see reasons in paying our seven months salaries and reinstating us back to work.

On why did the group conceived that they were technically denied the use of NUJ Secretariat for a press conference?

The group said they initially intended to visit the correspondents chapel, when superior idea suggested that NUJ conference Hall would make a wider coverage and a beffitting venue.

“When we approached the NUJ leadership, we were told that it would have to be formal; we must have to apply through the chairman, who would present our request during the Exco meeting before forwarding it to tge DSS for approval.

“An insider told us that it was not the way it’s been done. NUJ leadership would simply want to frustrate by delaying our actions and intentions. That’s why we invited the newsmen to another befitting venue,” Faisal Baba said.