* Several Yoruba heritage buildings and private properties burnt down and you still believe this is about protest or fall out from Army's shooting? Someone or people somewhere have declared war on Lagos State and by extension on the South-West. Only a fool will clap while his father's house is being destroyed - Conscious man of Eko 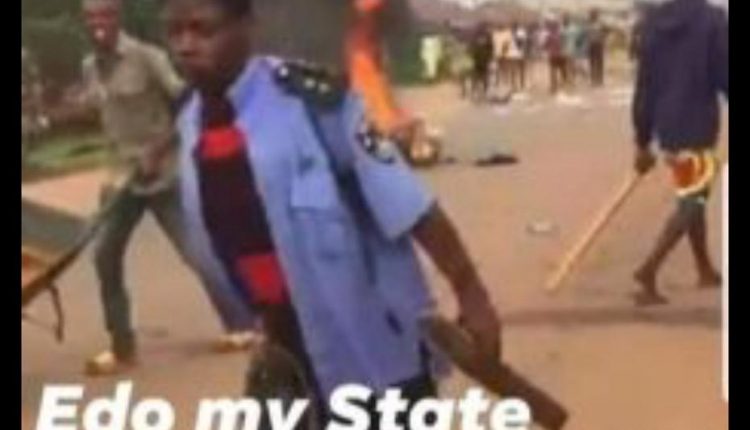 * Deltal and Edo, Imo states also visited by the savagery as #EndSARS have been hijacked by the alleged sponsored scallywags

Is it actually a protest aimed at ending SARS brutality by agitating for its disbandment or it is a window opened to destroy Lagos?

The #EndSARS rioters alleged that security operatives have killed the peaceful protesters in Lagos. The security denied that there was a shooting intended to kill, coordinated by the agency of government charged to keep peace and maintain security.

The honest question that is remained to be asked is, who are behind the conspiracy for the protest turned protests degenerated to riots.

There have been resistance, kind of Anti-EndSARS protests in some states like Adamawa and Cross River, where the youth, while challenging the #EndSARS rioters, articulated that their states would not be let to degenerate into anarchy.

#EndSARS would equally be unfashionable in Abuja where the majority of the youth would not key into savagery to be reduced to vagabonds.

Since the states in the north would not be visited by the devastating effects of the #EndSARS riots, then the lives and properties of the Hausa/Fulani communities would not be spared in Aba, Abia state, southeast Nigeria and Port Hercourt, Rivers state, south-south.

This, political analysts and strategic thinkers argued, was to plunge the country into ethno-religious conflict when the states in the north like Kano and Kaduna would take to reprisal attacks.

In Imo state, a policeman was reported to be killed by the #EndSARS riots, which resulted in the governor to impose curfew to prevent further savagery.

Can the entire youth in Lagos and indeed the Oduduwa entity be said to be lacking critical thinking? The silence, the non-said against destructions of cultural heritage, public and commercial places in Lagos make nonsense of the youth.

Some elders, human right groups, international media and even governments have blamed the security operatives for the protests turned riots ignoring the savagery and barbarity associated with the protests unleashed by the protesters with impunity without any condemnation.

People are killed in Abuja, but the police or any security agency was not alleged to have had a hand in the savagery. Why should the shooting in the Lekki Toll Plaza that resulted to the death of some protesters be the only killing to be given adequate publicity, outcry and condemnation?

Human lives, Media Houses, police stations, palace of the monarch, correctional centre, other public buildings and properties are torched in Lagos as if it is a den of SARS with the riots taking unwanted dimensions.

Lagos, more than other states, is indeed under attack and something has to be done to end the conspiracy against the commercial centre of our country.