* Hundreds of kidnapped students of a Katsina school have been released by their abductors. Published 16 hours ago on December 17, 2020 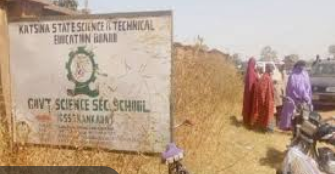 The kidnapped students of Government Science Secondary School in Kankara, Katsina State have been released.

This was confirmed by Bashir Ahmad, President Muhammadu Buhari’s Personal Assistant on New Media, in a tweet post.

Ahmad tweeted, “The abducted students of the Government Science Secondary School, Kankara has been rescued, the Katsina State Government has confirmed the news. Alhamdulillah!”

The news is coming on the heels of the terrorist group, Boko Haram claiming to be responsible for the abduction of the boys and releasing video footage showing them to back-up their claim.

What You Should Know

The schoolboys were abducted by men who arrived on motorbikes and attacked the school last Friday, December 11.

Over 300 students were reportedly abducted and taken into captivity with only a few able to escape the hold of the kidnappers the following day.

During the week, the Presidency and the Katsina State government said that they had made contact with the kidnappers and were negotiating the release of the schoolboys
Nairametrics also reported that the Presidency had initially denied reports that over 300 students were abducted in the attack.

The President’s aide, Garba Shehu said the school children who escaped said 10 of their friends were still with their abductors, contradicting reports that the total number of students was up to 333.