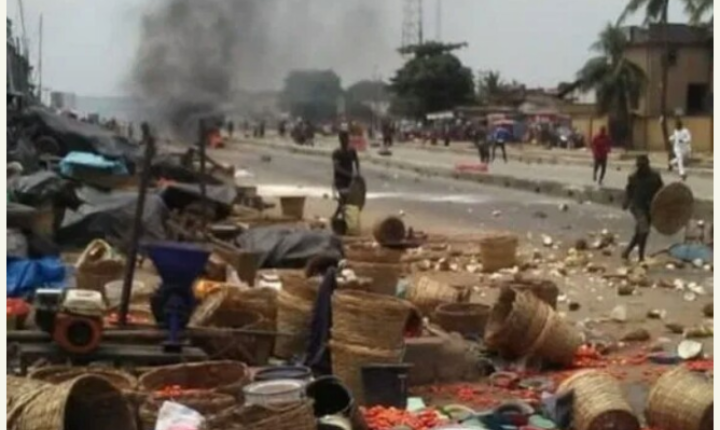 At least 10 people have been killed, 70 sustained gunshots injuries and over 30 Northerners declared missing in a deadly attack on Sasa Market traders in Akinyele Local Government Area of Oyo State.

Over 6,000 Northerners, mostly Hausas, are currently taking refuge at the residence of Sarkin Sasa, Haruna Maiyasin.

“I have over 6,000 displaced people packed in my house. Many people have been killed, while others injured,” Mr Maiyasin told DAILY NIGERIAN.

Witnesses said the crisis erupted on Thursday when a porter carrying a basket of tomato inadvertently nudged a Yoruba woman. The woman allegedly retaliated and organised a group of Yoruba thugs to avenge.

One of the rather unidentified things who was said to be taken to a hospital after the fight, was claimed to be given to the ghost.

When the rumours of the claimed death circulated, the mobilised Amotekunaed youths by means of perceived reprisal, attacked the Northern traders.

In a interview with DAILY NIGERIAN, the chairman of Sasa Market Traders, Usman Yako, said they reported to the police about the incident immediately after the rumours surrounding the death as claimed but the police did not promptly respond to their call until the situation went out of control.

“We called the police to inform them about the issue, and possible break down of law and order, but they did not take action immediately until the situation deteriorated.

“It is apparent that it was a targeted attack on Hausas and other Northerners.

“The attack also spread to the Lagos-Ojo Expressway, which is not far from the market. Trailers belonging to Northerners were looted, burnt down, and the drivers slaughtered.

“We were invited to Government House yesterday (Friday), and two of us were delegated. Nothing was actually done to avert the crisis and safeguard our lives.

“We have so far counted 10 bodies in the hospital. Over 70 people sustained gunshot injuries. 30 people, including my own brother, are missing,” he said.

On Saturday, Governor Seyi Makinde imposed a curfew on the area and shut the market indefinitely.

A statement by Taiwo Adisa, the spokesman for Governor Seyi Makinde, indicated that the governor gave the order to forestall breakdown of law and order in the area.

The statement warned residents of the affected area to go about their legitimate businesses peacefully, stating that anyone caught perpetrating violence will face the wrath of the law.

The northern youth group has condemned the barbarity associated with the ethnic profiling aimed at instigating anarchy for disintegration.

“Some ethnic groups have taken to unleashing violence against the citizens of northern origin, working the script aimed at disintegration. This is indeed condemnable.

“Fulani herdsmen are given bad names to hang. There are reported cases of the citizens of southern extraction in conspiracy, disguised as either Fulani herdsmen or the Hausas to unleash violence in their communities and the stories are buried without the criminals facing the law. Where they had their way, their crimes are credited to the preys as predators; the northerners.

“Crimes committed by the southerners are not ascribed to their tribal leaning, they are simply addressed as Yahoo boys, kidnappers, armed robbers, why then incriminating the north or the Fulani for the crime committed by deviants?

“We’re also about exhausting our northern patients. If the narrativisation could not be reviewed for national integration, integrity and mutual coexistence”.