GOMBE: After the Tussle, Maiyamba Mounts The Throne As The New Mai Tangale

What a memorable and rewarding tussle! The name; Maiyamba, rhymes the title and the throne; Mai Tangale - The Poet 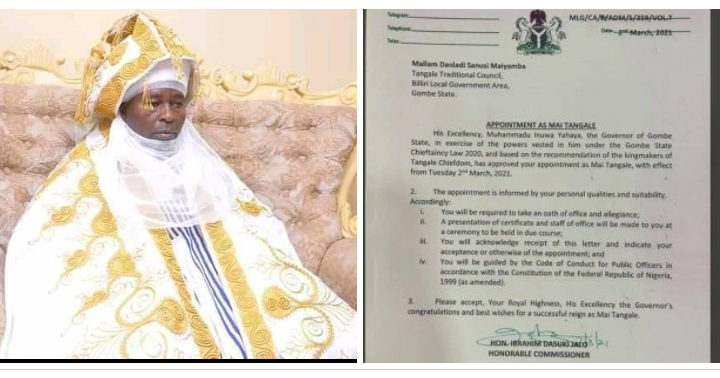 Governor Muhammadu Inuwa Yahaya of Gombe State, the Jewel in the Savannah who would not, as he earlier declared, be intimidated by blackmail into submitting to the egotistical and narcissist interests of the anarchists, has approved the appointment of Malam Danladi Sanusi Maiyamba as the new Mai Tangale.

The Commissioner, Ministry for Local Government and Chieftaincy Affairs, Ibrahim Dasuki Jalo who conveyed the approval said the Governor has exercised the powers vested in him under the Gombe state Chieftaincy Law, 2020 and based on the recommendation of the Kingmakers of the Tangale Chiefdom.

The approval letter presented to the new Mai Tangale in Poshiya, Billiri, said the appointment of Malam Danladi Maiyamba was informed by his personal qualities and suitability.

The presentation ceremony was witnessed by the Chairperson of Billiri Local Government Council, nine kingmakers of the Billiri chiefdom, members of the traditional council and other functionaries.

A statement by the Director General Press Affairs, Usmaila Uba Misilli said the presentation of Staff of Office would be done in due course.

Billiri town was recently engulfed by violence over alleged resulting to conspiracy aimed at what the governor considered blackmail he would not be intimidated to or coerced into appointing the choose of the oppressors, who restored to destructions of properties, markets, Mosques and mayhem against Muslims. 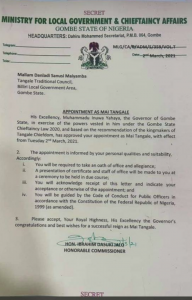 OPINION: No Southernersl can endure oppression, annihilation northerners endured in the south In the name of peace