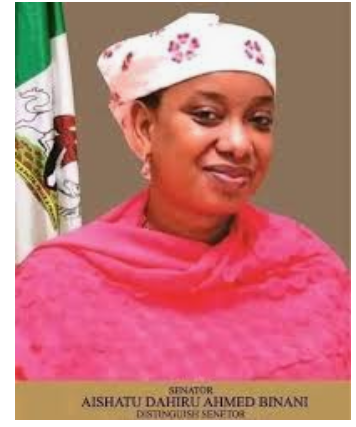 After the success of Modibbo Adama to a conventional University Bill, Senator Aishatu Dahiru Ahmed (Binani) is once again on her feet with 3 brand bills before the Senate.

The Federal Medical Centre Establishment Bill 2021, is one of the other Bills sponsored by the Gimbiyar Adamawa, which is presently progressing in the red chamber, yet trailed with questions from Adamawa Central and beyond.

While some people asked what the Bill is all about? Other people misunderstood the Bill as a provision that would see to the Establishment of a new Federal Medical Centre in Adamawa state, in addition to the existing FMC Yola.

The Bill, which was read on Tuesday 9th February 2021and Thursday 18th February, 2021 for the first and second reading respectively, sought to address the lacuna in running the affairs of the FMCs nationwide.

As a Senator of the Federal Republic, the legislative amazing amazon, Aishatu Dahiru Ahmed (Binani) raised an issue of most hidden concern that the present Federal Medical Centres across the country do not have the legal backing for both their establishments and operations that would ensure efficiency in running the healthcare facilities.

While leading the debate on the need to provide legal backing for the FMCs, Sen. Binani reminded the Senate that the Federal Medical Centers were to:

2. Be constructed, equipped, maintained and operated in the light of providing training schools and institutions necessary for providing advanced healthcare services.

The Senator lamented that as noble as these objectives are, there was no enabling law to back, support and propel superlative outcomes for the benefit of Nigerians.

The absence of a legal framework for the regulation, development and management of Federal Medical Centers to set standards for rendering healthcare services has hindered the ‬provision of intensive, effective and efficient healthcare services to the people of Nigeria.

According to Binani, this has led to a number of challenges in these health sectors, including but not limited to under-funding, weak facilities and infrastructure, poor motivation of health workers, low budget, conflicts with the political structure of the states and industrial strikes, that led to inadequacies, shortcomings and weaknesses, which hindered effective and efficient quality assurance healthcare delivery.

Sen. Binani convinced the Senate that the FMCs Bill, when passed would provide such enabling environment that would facilitate:

1. Provision of general policies and guidelines relating to major expansion programmes of the Medical Centers.

2. The acquisition of facilities for the training of medical students of associate universities.

3. The management and superintendence of the affairs of the Medical Centers.

4. The powers to make, alter and revoke rules and regulations for carrying on the functions of the Medical Centers.

5. The fixing of terms and conditions of service, including remuneration of the employees of the Medical Centers, which would check the exodus of doctors and nurses, especially with the fact that 77% of black doctors in the US are Nigerians and there is rarely any top medical institution in the US or Europe where you don’t find Nigerians managing at the top level. Hardly a year passes without a major national strike by either nurses, doctors, or health consultants. The major reasons for these strikes are poor salaries and lack of government investment in the health sector.

With resounding and overwhelming support, Senators took their time in support of the Bill, describing it as timely and commendable.

With the FMCs Bill, Senator Aishatu Dahiru Ahmed (Binani) has once again played the role of a distinguished senator of the Federal Republic that she is and has been known.

The Bill is now referred to the Senate Committee on Health to report back within four weeks.