Bole: The Clash Of Harvest Between Farmers And Herdsmen 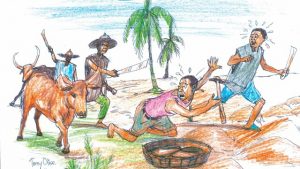 It is indeed a season of harvest. Farmers at Bole village area in Yola south LGA of Adamawa state, Nigeria, some of whom were public servants, were seen jubilating over brilliant yields.

“It’d really be a good harvest. The rice farms, the beans, the maize, it’s just amazing,” a farmer there once exclaimed.

However, the farmers were not to harvest their farms produce alone. They were said to have received a rather informal notice from, that some herdsmen would lead their herds of cattle to feed from the farms produce before the harvest.

Some farmers were reported to have expedited their efforts in harvesting, while some who were not opportune to harvest their farms yet, were said to be keeping a sunrise to sundown and a dusk to dawn, guarding their farms against the encroachment of some naughty by nature herdsmen without attitude.

The village head, whom the information was said to be reported to, could not to enough in the clash of harvest between the farmers and the herdsmen.

The leadership of the Miyetti Allah or any other umbrella the herdsmen could be having the membership, if at all were notified, were said not to be active.

The security agencies ought to have been forwarded, however informal, the notice of the about to be a clash of and not a shared harvest. It could be afterthought if at all it was taken into consideration.

How about the media? The Periscope Global Investigate only got wind of it, when a correspondent decided to romantically go country side for a homely rustic and rural experience away from nuisance and suffocation associated with urbanisation.

The romantic experience would however not get to be enjoyed owing to the unrest associated with the herdsmen and farmers feud fueled by inactivity of the local headship who ought to have been proactive in sending report, added to the lack of ground, set for conflicts resolution aimed at mutual coexistence.

some farmers went to harvest their farms only to be beaten to it by the herds of cattle.

“You See. There’s virtually nothing left. I’ve spent over N150, 000. I’m now back to ground zero; a chronic customer to debt,” a farmer whose farm was encroached lamented.

There was pandemonium at Bole II. Some farmers were seen deserting their farms Tuesday, when they were said to have been overwhelmed by the armed herdsmen.

“Herds of cattle were being driven by the herdsmen from the mountain you see there, to come and graze from our farms produce before we could get to harvest it.

“We protested. However, our lives were threatened. They were armed by machetes and battle ready.

“Our labour, our sweat, our wealth, the time spent in the farmland, all went in vain,” a farmer lamented. Bursting into tears.

Other farmers who eventually cried could weep no more.

Something proactive needs to be done. community meeting and prompt reporting of such incidences to appropriate authority in avoidance of further clashes of, rather than shared harvest between farmers and herdsmen.

The story of Cain and Abel recapitulated rather than told in the Holy scripture, should only serve as a lesson rather than having the rivalry reenacted.

farmers use cattle to plough or tilt their farms, benefit from fertilizer produced by cow dung and even convey their harvested farm produce back home or to market for sale. cattle graze from the farms after, not before the harvest as much as the herdsmen feed from the farm produce.That is how shared harvest works for mutual coexistence.

Farmers and herdsmen ought to be birds of the same feather that flung together; they are both farmers meant to live in peace and harmony rather than remain in pieces as avowed enemy. Peace!