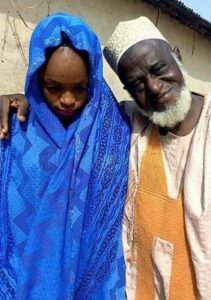 Yakubu Chanji a man whose age was put at 70, was given a teenage girl said to be 15-l years, who could have been forced out of school for marriage in Lapai Niger State

DAILY HINT gathered that the wedding Fatiha took place on Monday in Lapai, Niger State, with family and friends of both bride and groom in attendance.

Mr Chanji, also known as Nafsi-Nafsi in Minna city, earned the sobriquet “Chanji” owing to his being irresponsible old dotard who has no respect for the institution of marriage based on his frequent divorces and replacements of wives.

“Chanhi is a philanthropist in Kwangila area of Minna. He has contributed immensely to the community, especially the building of the community mosque.

“We call him Chanji because he regularly ‘changes’ wives.

“In my knowledge, he married at least 12 times. Other people however put it at 20 times.

“What we know is that he always keeps four wives in his house. Once he divorces one, or one of them dies, he immediately picks a replacement,” said a source who preferred not to be named.