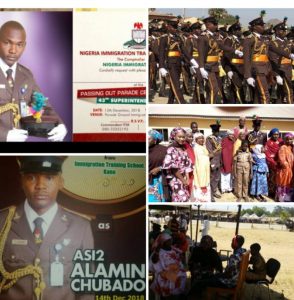 A product of a worthy family marriage you could say: Al-Amin’s father, Muhammad Chubado was the eldest son of the monarch in Maiha and his Mother Aisha of noble birth, was the first female child to Justice Modibbo LM Dodo

Both parents were Unimaid made and their certificates would not be subjected to any suspicion of fraud:

Chubado read law while Aishah read Islamic Studies to he able to establish a befitting home that would breed a son that would bear his maternal grandfather’s name and his siblings.

Al-Amin was trained to dislike stealing answers in classroom as much as he detested the student-thieves who used to break his locker at the dormitory during school hours. You can be sure that certificate forgery would be a noise loud enough to hamper his eardrum.

I’ve been fund of my niece, the fresh prince who on bended knees would follow his teeming uncles and aunties with fresh morning greetings, whenever it’s holiday. He would want from me, some knowledge about the position of Halliday on systematic functional grammar as his colleagues chanted hallelujah.

He found the lesson initially abstract, newfangled and far from being English air explaining how Halliday divided the ideational into the logical and the experiential metafunctions.

Where as the logical metafunction referred to the grammatical resources for building up grammatical units into complexes, for instance, for combining two or more clauses into a clause complex.
I would be repeating the explanation often until either he understood or he got bored.

Should he try Noam Chomsky the linguist’s theory, which postulated that universal grammar is right? He would be suggesting for simplicity.

In the 1960s, Noam Chomsky the linguist proposed a revolutionary idea that the entire human beings were born with an innate knowledge of grammar that served as the basis for all language acquisition. Suffices to say that for humans, language was a basic instinct.

Why was he disturbing me or why was I playing the nuisance. He would want to learn about English language but not beyond his level.

Just enough to interact, to give him a credit in his final examination as a requirement in gaining admission into higher institution of learning, he would suggest.

Little I did know that the fresh prince would be a genuine geographer without any air about certificate forgery, not even bribery or lobbying who grades not befiting of his performances.

Am I accurate reporting what had happened or it’s a mere defective memory?

My sister, my niece mother Aisha and her sister Ramatu used to “carry me on their backs” to school. I could recall I was underaged but would not want to be left playing at home and I couldn’t bear the biting sun.

Could it be the reason for my interest in having the younger ones have an upgraded knowledge beyond their colleagues?

Our elder brothers used to be “nuisance” to us as well that we never wished to have them return home for holiday.

Today, our yesterday’s seeming nuisance brothers and sisters who seriously bothered about us having have to read different books, widely too, are our heroes, we remain ever grateful and always praying for their success in this life and in the life great beyond, as much as we pray to our parents.

Life.is like world, a circle, a ball, someone likened to a wall clock and that whatever goes up most come.

Artisans would desire their children to be more industrially dexterous in taking after the family vacation for the flame of the profession to remain inextinguishable.

Although, Muhammad Chubado, Al-Amin’s father is a barrister, he served his country as an immigration officer and has risen to the highest rank.

Realising that whatever goes up must surely come down, Al-Amin by means of providence, stands as a shield with the retirement of his father from active service.

The courageous rather incorruptible like father like son young graduate, quickly stepped into his seeming father’s big shoe through a short course. The confirmation of the success was the passing out parade for which part of the family joined in Kano as participating audiences.

The entire family are indeed proud of you, beginning a carrier as an Assistant Superintendent of Immigration..

You are to keep to the spirit of the family by remaining incorruptible, be disciplined and dedicated to assigned responsibilities

You are now matured to know that our house in under attack and that like your grandparents, your parents have not and will not fall their arms against alien incursion.

We insist on legitimacy, on justice and in defence of our rights and protection of our properties.

An open enemy of sadistic egomaniac nature, should not come and lure you for any mandate. Any mistake made will result in humiliating you out of your noble house and disclaiming your innocence and experience.

That’s why you’re sent to school son. That’s why I was playing the nuisance, insisting that you must learn, to be able to address atrocities as byproducts of ignorance.

You must join in defending your house in God’s name. Our strength lies in our belief in the unity of the Almighty the Most Merciful and in our unity as a family.

This is the congratulatory message, marking the beginning of the struggles to make peace in peace for peace in and to our peaceful cherished community.

Rep Members Who Will Not Return To The House In 2019