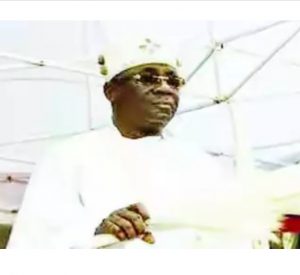 The Oba of Lagos, Oba Akiolu 1, has said that God will not allow any other party to take over governance in the state in the forthcoming general elections apart from the All Progressives Congress (APC).

Oba Akiolu stated this in his remark yesterday at the 11th Annual Hijrah Lecture and inauguration of the new House of Assembly Mosque at the Assembly complex yesterday.

The new mosque, he said, is unique especially as it is built inside the Assembly complex where bills are passed into laws.

The Oba also pointed out that it is not enough to build mosque but that the custodians of the mosque should be properly taken care of.

He also advised the custodians not to do or be involved in anything that would tarnish the image of the religion.

Speaker of the Assembly, Hon. Mudashiru Obasa, commended the congregation for donating fund for the rebuilding of the mosque.

He described a mosque as a holy place to worship Allah and supplicate to Him, adding that the custodians should do everything to ensure that it serves the purpose for which it was built.

Special guest of honour was Governor Akinwunmi Ambode who was represented by the Commissioner for Home Affairs, Dr. AbdulHakeem Abdulateef, who is the Chief Imam of the House of Assembly Mosque, while the chairman of the occasion was Oba of Lagos and permanent chairman, Lagos State Council of Obas and Chiefs, HRM Alaiyeluwa Oba Rilwan Osuolale Akiolu 1.

In his speech, the chairman of the Muslim community of the Assembly, Hon. Sikiru Osinowo, thanked God Almighty for the completion of the mosque.

“We started the mosque project so that we could fulfil the purpose of our coming here. We have seen Muslim speakers and God made it possible for us to build the new mosque during the time of the current Speaker, Rt. Hon. Mudashiru Obasa,” he said.

Two clerics delivered lecture on the theme and title of the lecture, ‘The place of the mosque in human civilisation’.

Mayaleke describes a mosque as the “first house God provided for man. It is a place of learning, meeting, judgment, worship, a place where we meet on how to defeat our enemies.”

And that praying in the mosques for men is more acceptable than to pray at home, and that all Muslims must be given an opportunity to pray in the mosque.e