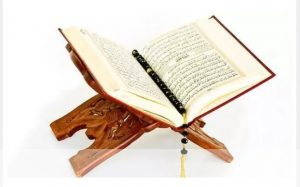 The Holy Qur’an is one of the four (4) major scriptures sent by Allah to mankind, namely: Zabur, Attaurah, Injeel and Al-fur’qan, otherwise known as Qur’an, which was sent to Prophet Muhammad (Peace be upon Him) through angel Gabriel.

The Scripture which has 114 chapters was revealed initially, at the city of Mecca and finally, Madinatul Munawwara, within the period of 23years with a view to serving as the guiding principles to the entire Muslim Ummah, the world over.

It is imperative to note that, Gombe State, for the first time since its creation in 1996hosted the National Qur’an Recitation competition, where 34 states and the FCT participated given the young state a pride of place in the polity.

The idea of bringing Muslims young Boys and girls for the competition was muted by the Centre for Islamic Studies, Usman Danfodio University, Sokoto in 1986 which the maiden edition took place in Sokoto (The seat of the Caliphate).

However, this clearly demonstrated that the annual event which started over three (3) decades ago, was the brain child of the Centre for Islamic Studies Usmanu Dan Fodio University, Sokoto, hosted by various states of the Federation in rotation and after due selection, as committee Saddles with the responsibility of organising the MUSABAQAH, used to pay visitations to states to ascertain the level of preparedness, before granting approval for hosting.

For the government and people of Gombe State, hosting such a national gathering where Muslim clerics, legal luminaries, participants, politicians and members of the business community gathered under one umbrella, was indeed a rare privilege, which needed to be utilised maximally for the overall development of the young but promising state.

In Qur’an chapter 35, verse 29, “Allah says: surely those who recite the holy book and have established prayers (Sallat), and have spent, secretly or openly, from what we have provided to them, they hope for a trade that will never crash”.

On the other hand, the messenger of Allah in one of his traditions says “the best amongst you is the one who learns the Qur’an and teaches it”.

With the above illustrations, one would conclude that reading the holy book which is the theoretical aspect and putting it into practice would help promote piety, mutual respect and understanding among the populace in the society, thereby attracting meaningful development among nations.

The competition, which was in six (6) different categories for both male and female contestants, has laid down rules and regulations guiding its conduct, bearing in mind that fair-play is a universal concept that guides all competitions globally, especially, the most honourable of all, which of course is the MUSABAQAH.

In his address at the opening ceremony, the Vice Chancellor, Usmanu Dan Fodio University, Sokoto, Professor Abdullahi Abdu Zuru expressed his profound appreciation to the government and people of Gombe State for what he personally described as the sustained interest and support that they have shown in hosting this year’s MUSABAQAH in the Jewel State.

Also in their separate remarks, the special guest of Honour, President Muuhammadu Buhari and the chief Host, Governor Ibrahim Hassan Dankwambo stressed the need for peaceful co-existence among Nigerians, devoid of ethnic, religious or political sentiments, as the 2019 general elections are around the corner, adding that no meaningful development could be achieved in a chaotic situation.

The Guest speaker who is the Director General, National Information Technology Development Agency (NITDA), Dr. Isa Ali Pantami spoke on the significance of seeking for both Islamic and western education among the Muslim Ummah for the prosperity of the country, which according to him, would promote tolerance among followers of different religious beliefs.

As the week-long activities entered its 5th day, Governor Dankwambo was physically present Tuesday evening where he joined audience in the on-going MUSABAQAH at the convocation square of the Gombe State University.

Certainly, the Governor’s presence where he spent more than three (3) hours listening attentively to the exercise delighted many people including the panel of Judges, which demonstrated the spirit of leadership by example.

In conclusion, the MUSABAQAH, which was rounded up on Saturday 5th January, 2019 has the objectives of promoting the reading habit of the holy Qur’an among Muslims, knowing the Holy scripture both phonologically and syntactically as well as fostering unity among the Ummah from the length and breadth of the nation.

No doubt, the coming of Muslims from Lagos to Maiduguri, and from Sokoto to Rivers down to the north eastern part of the country, Gombe State could attest to the one-ness of Islam and its followers.

At the end of the competition, those who participated and won prizes at the national level, would represent Nigeria at the international competition, scheduled for Saudi Arabia later, in the year.

It could be recalled that, an indigene of the State, Yusuf Muhammad Dukku, emerged overall winner at the 2015 National Qur’an Recitation Competition held in Edo State, and became 2nd internationally at Saudi Arabia.

A Eurostar Meeting Of Africans In Diaspora For Reminiscence Before Despatch