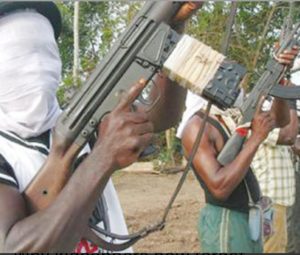 It was not a farewell goodnight to Ganye Sunday for a how do you do, preparatory to busy Monday, having been disappointed by the postponement of the presidential and national assembly elections Saturday.

Ganye, a peaceful community, with its attendant hospitality, lacking any house to honour hostility, was about an hour ago, intimidated by though a foiled abduction, intimated the Periscope Global Investigate.

Ganye, known as the food basket of Adamawa state, where farmers and herdsmen long recognised the beauty and blessings associated with living in harmony rather than mutual suspicion and antagonism, with farmlands serving also as grazing field after the harvest for a fertilizer to be meant for next harvest, is politically, a stronghold area in the southern senatorial zone of Adamawa state, with a solid ancient history, story and wisdom worthy of a chiefdom.

Alleged armed kidnappers on motorcycles, stormed the house of a businessman called Hussaini Kumlasa to have him abducted.

Kumlasa, in spite of the threat to life, while he was forced on one of the motorcycles, stubbornly created a scene with riotous resistance, reserved only for the courageous who deserved commendation, which attracted some men for a quick rescue by querying the seeming strange scenario.

In an attempt for escape, the alleged kidnapper gangsters, the Periscope Global Investigate will report, resorted to sporadic gunshots: firing not just on the air but anywhere at every direction.

The act further attracted the attention of not only more rather courageous men but also the security operatives.

The operation, was said to have left one person who joined in the rescue mission, with a bullet wound. While Hussani Kumlasa escaped being kidnapped.

The kidnapper gangsters took to their hills, humiated by an unaccomplished mission, which was alleged to have started since Saturday last week.

The Gangsters’ suspicious movements in the area, especially, around Kumlasa’s house last week, was said to have been perceived by them, as leading to revelation from genesis. Realising the implication, the criminals, simply left the to have been their crime scene only to return Sunday.

The security operatives have since taken action to cushion the situation, restoring normalcy and confidence about security.

Gangwari Ganye goes against gangsters by whatever name or outlook, character and characteristics. He would conceive the act as an attack on his chiefdom that is known for peace, knowledge and agriculture, a man of wisdom would confide in the Periscope Global Investigate.

Communities and citizens must join the popular call, condemning kidnappings, insurgency and all forms of terrorism.

Opinion: Who Is PDP’s Mole In INEC?