An open letter to the Prime Minister of New Zealand

An open letter to the Prime Minister of New Zealand, 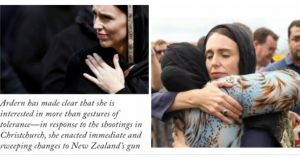 I would like to take this opportunity to send you my personal and heartfelt gratitude and praise for the most remarkable, brave and magnanimous leadership you have demonstrated under extremely testing and dark circumstances. Your heartwarming words of wisdom and steel like determination have lifted the image of New Zealand and her people to new heights. You have resolutely shown compassion and humanity as the two most admirable leadership qualities, not just in words but by actions. You are a remarkable human being.

I did not know you before but now that I have seen you in action I will never forget you. In fact it is not just me who will never forget you but the whole world will forever remember you for the way you made the Muslims of New Zealand feel safe in your hands despite the most heinous attacks on them, and your words and actions have made them feel as welcomed and equal as everyone else in New Zealand. It takes extraordinarily courage and conviction to be a leader like you. May God bless you and protect you.

When the news of the attacks reached your ears and eyes you described the incident in the following words without hesitation or divination: “It is clear that this can now only be described as a terrorist attack” and by doing so you demonstrated your immense knowledge of your surroundings and your mental fortitude to remain fair and calm. Unlike other leaders around the world who often cower away from standing with their Muslim citizens under attack and behave duplicitously just to appease their large far right voter banks, whereas you spoke the truth and promised to serve justice to the victims of these attacks swiftly.

Dear Prime Minister, you did not stop at calling the action a “terrorist attack” but you went out of your way and joined the Muslim community in their moments of extreme grief, you wore a headscarf to show respect and solidarity with the Muslims, you hugged them and cried with them, you stood by them and walked with them to their funerals and burials. You demonstrated through your actions how a genuine leader can foster immense love for humanity regardless of differences. When you said, “we are one, they are us” each and every one of us, Muslims all around the world, could not hold back our tears of joy at this moment of extreme grief. We felt finally a leader in a western country where Muslims are tiny minority, publicly and confidently, has embraced us as one humanity. It is. clear that you embrace differences and nurture power out of it, whereas other leaders fall victims of our differences and embrace fear that is spread by far right racists bigots and Islamophobes. With your generosity and compassion you have made strangers your best admirers and friends. You deserve to be called the best role model of human values of our time.

You refused to even utter the name of the terrorist who stole the lives of fifty innocent people while they were in a mosque offering their prayers. You begged everyone else to do the same. You taught the world the value of honour – remembering those who were killed and forgetting the killer. You said, “We, in New Zealand, will give him nothing. Not even his name”. You scored a powerful victory against terror simply by refusing to say the Christchurch attacker’s name.

“He sought many things from his act of terror, but one is notoriety. And that is why you will never hear me mention his name. He is a terrorist. He is a criminal. He is an extremist. But he will, when I speak, be nameless.”

I have never seen or heard such a genuine expression of power and control from any contemporary leaders in our world. You have steel and solace in your personality and thus you have been able to unite your country and millions around the world. You deserve our love, respect and prayers. I pray that God’s grace be with you.

You did what no other leaders in the western world have ever done or ever dare to do – you greeted your nation in your parliament with the Islamic greeting “Assalamu Alaikum” (may peace be upon you) and your words have flooded our hearts with peace instantly. Your true desire to include us in the depth of your heart was visible in your face for all to see and admire and in your action for all to feel safe. You then proceeded to open the parliamentary proceedings with a recitation from the holy Quran, this was even more generous gesture of goodwill, an action that sent shivers of elation down our spine. You are the first leader of a western nation who has the courage to defend the honour of your Muslim minority citizens and guests offering them an equal seat next to you. I believe the Muslims of New Zealand no longer feel an outsider but an equal citizen. I am a British citizen but you made me feel like wanting to migrate to your country so that I too can enjoy the true equality you are offering. I would like to pray for you and your countries’ men and women’s success and happiness.

Dear Prime Minister, you took decisive action in changing the course of our history, not just for your country but for the global community. You promised to bring tougher gun laws within 10 days and you kept your promise. You have shown the world that you will not be bullied by gun lobbyists or far right activists. You have remained true to your words. You have not waited for populist consensus to emerge but you have shaped it. You have utilised your powerful office – the Prime Minister’s office, to challenge bigotry like no other leaders have ever done in my living memory. You have become the antithesis of hatred and true face of love and compassion. May God fill your life with love and compassion.

When the world’s most influential bigot and Islamophobe, Donald Trump called you, your response resonated with peaceful and loving people of the world and reverberated across the world’s political establishments. You gave him a slap on his face with your beautiful words of wisdom and humanity. When he asked you how USA could help you said to him “Sympathy and love for all Muslim communities.” The icon of hatred has not an ounce of sympathy for the Muslims and therefore received from you what he most deserves. I am so grateful and humbled that you did not give him the space or opportunity to bring his toxic and venomous Muslim hating mantra to infect your wonderful work. May be he will learn a thing or two from your beautiful work.

Your desire to embrace the Muslims of New Zealand has made further history today when every radio and TV station broadcast the Adhan – call to prayer. When the call to prayer went out each and everyone from New Zealand and all around the world must have watched in awe your determination to show that the Muslims are part and parcel of New Zealand. Prime Minister, I do not have sufficient words in my memory to be able to express what this meant for us. This is your nations most bedazzling display of unbound humanity, overwhelming love and the depth of their profound empathy with their fellow Muslim men and women. If it was not for your leadership I do not think this would not have been possible. May God envelop you with His light.

Dear Prime Minister, your actions would make Muslims of New Zealand confidently Muslim and comfortably kiwi (New Zealander). They will not suffer from identity complex like we have in Europe and you would have eradicated Islamophobia from your country with your most generous gestures of welcome, unlike other western countries in Europe and America. The truth is most leaders in the Muslim majority countries have failed to match even one gesture of goodwill that you have demonstrated.

I am an Imam and broadcaster from the United Kingdom. My family has been here for 70 years but our status as British citizen is increasing looking precarious. One day we are British but another day, and without a due process, we could be stripped off our nationality, almost whimsically by politicians. We have struggled with institutional and grassroots Islamophobia in our country. We have the current governing party plagued by Islamophobia and they have refused to take any decisive actions including an independent inquiry. We have far right media and journalists who are unashamedly spouting out Islamophobic rants on a regular basis. I find UK’s approach to tackling Islamophobia rather primitive and successive governments have been too scared of the far right backlash to take any meaningful measures. I would like to commend you for paving the way to dealing with Islamophobia head on and with so much grace and understanding. You have shown that you can challenge Islamophobia robustly and powerfully. I would like to thank you again for showing such a powerful leadership.

As a father of two children, aged 13 and 10, I take my children to the mosque often. They usually sit with me right at the front. As an Imam when I am leading prayers, especially ever since the mosque shooting in Christchurch, my mind does wonder, what if someone walked in with a machine gun in our mosque and started shooting. The consequences is too gruesome to even consider and my natural instinct of fear grips me but when I see how you have turned the darkest day of your country into the most powerful expression of love and compassion, I am strangely empowered and comforted. May God shower you with love and compassion.

Dear Prime Minister, just before I finish, can I take this opportunity to simply thank you even though no words of thanks would ever be enough to express my and our gratitude to you. I would also like to pray for you, your families’ and your nations’ success, happiness and prosperity.