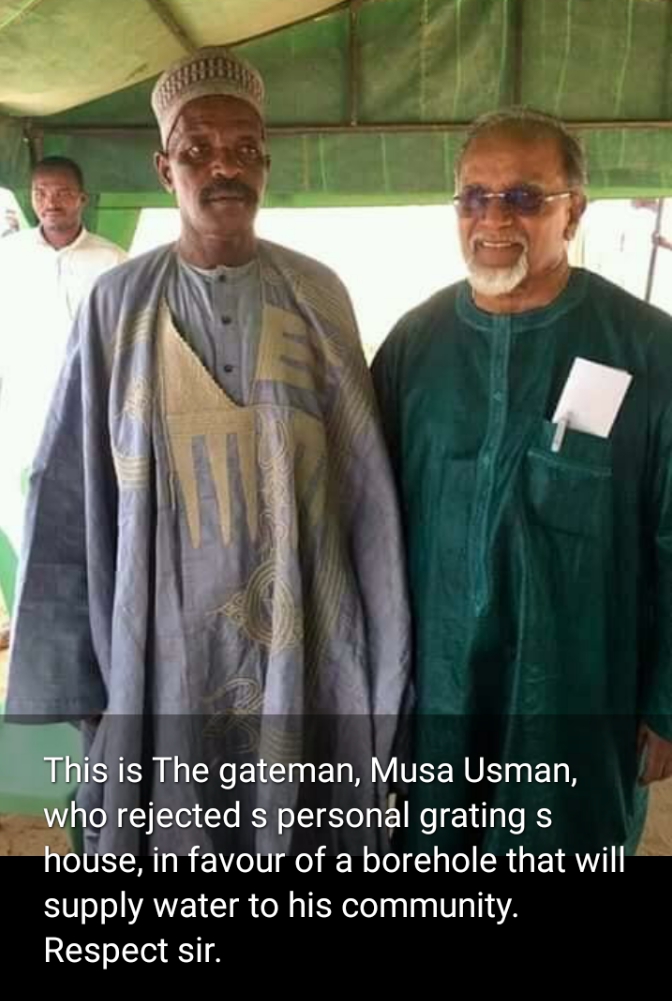 A gateman, Musa Usman, has rejected a house offer as parting gift from his boss whom he served for 25 years, requesting for a borehole for his community instead.

Usman, who hail from Giljimmi, a Fulani settlement in Birniwa local government area of Jigawa state, lives with his family in a thatch house.

Usman, who served the Indian national, the Managing Director of a pharmaceutical company, Jawa International Limited in Lagos for 25 years, left the services of his boss in order to reunite with his family in the village.

When Usman was leaving, the Managing Director of the Jawa Internatiinal Limited, Mr. V. Verghese, decided to build a house for him as part of appreciation for his diligent service while he was his gateman but Usman, whose community is suffering from acute water shortage, rejected the offer of the house and asked for the construction of borehole for his people instead.

In his address at the commissioning of the borehole, Mr. Verghese, said his decision for the parting gift was as a result of high degree of honesty exhibited by Usman while he was working for him, saying there was never a time when any of his items ever missed in the house for the period he had stayed with him.

“Musa has served me diligently for 25 years. We will travel to India and leave our house under his care and behold, we will meet everything intact. He is indeed, a honest Nigeria.”

In his address, Usman, thanked Mr. Verghese, for the kind gesture, saying there was no regret in rejecting the house offer.
Dailytrust