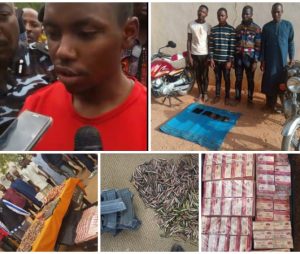 Security operatives arrested notorious kidnappers terrorising Katsina state and beyond. They confessed to be responsible for the recent kidnapping of the Katsina state governor’s Mother In-law 65yrs old Hajiya Hauwa Yusuf and several armed robberies and kidnappings within Katsina, Kano and Zamfara states. Also Arrested were suppliers of arms, ammunitions and hard drugs.

Sequel to the recent Kidnapping of the Mother in-law to Governor Aminu Bello Masari of Katsina state on February 8, 2019 at her residence in Katsina, on the instruction of IGP Adamu Mohammed, operatives of the IGP-IRT attached to Operation Puff Adder launched a massive manhunt of the kidnappers.

After serious and unrelenting follow-ups, the kidnappers along with their arms and ammunition suppliers, were arrested by IRT

and Ibrahim Bille 30 native of Mairuwa Village in Katsina state.

They were tracked to their hideouts and arrested in Platueau, Kano, Katsina and Abuja respectively.

Suspects confessed to the kidnapping of the 65yr old woman. They narrated how they negotiated, collected ransom and shared booty.

One of the kidnappers led the IRT team to a provision shop he set up with the ransom money in Katsina town.

Lands, houses and other properties bought by the kidnappers and armed robbers were identified and impounded

Found in the possession of the notorious gangs were 22 AK47 rifle, 1, 000 Magazines, Ak47 live ammunitions, 200 cartridges, some handsets belonging to the victims, including the Phone used for ransom negotiations and 2 motorcycles, which they used for their operations.

Commissioner of Police Katsina State police command paraded all the Suspects before the Press Monday.