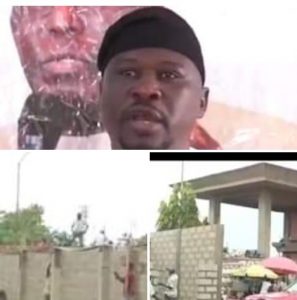 “Here comes the hammer that harms not the oppressed or the exploited,” A Persian poet

You could say he isn’t there yet, however, clearing of land before rainy season, makes the prayer for bumper harvest, it is said.

The governor elect RT Hon Umaru Ahmadu Fintiri lambasted the Bindow led government for the illegal allocation of infields and the non payment of April salary, barely few days to the inauguration of new administration in Adamawa state.

Fintiri said the illegal buildings would not only be pulled down, his government would deal decisively with any government official found wanting in the illegal allocation of plots of land belonging to Government Girls Secondary School GGSS Yola, close to the Adamawa Government House, other public schools in the state, infields and market areas, where he sternly warned traders to stop building new shops on the wall of Jimeta Ultramodern Market as it would be capable of exposing the market to security threats.

“Those who are entrusted with the custody of public property, betrayed the people’s confidence due to selfish interest. The dignity of our female children that is ought to be safeguarded in schools as was designed, is however threatened by the act of heartlessness. We shall revoked any allocation and pulldown any personal building within public school premises,” Fintiri said.

Fintiri gave the warning when he received branch members of Gamzaki Traders Union from markets within Jimeta metropolis and delegation of Peoples Democratic Party PDP from Hong local government area who paid him a congratulatory visit at the Atiku Support Group Secretariat in Yola.

The Bindow APC led government, was within two months previously, alleged to have allocated plots of lands on the walls of goverment buildings within the state capital for the construction of shops, which defected the master plan of the structures.

“I’m aware of the enormous challenges facing traders in the state. I will Insha Allah, fulfill the promise I made during my electioneering campaigns to support traders and provide better business atmosphere in the state. We however will need your fervent prayers, support and cooperation, to be able to succeed,” Fintiri said.

Fintiri lamented over the non-payment of April salary to civil servants in the state, accompanied by untold hardship to especially, during the month Ramadhan fasting.

“There is no excuse for the non-payment of April salary. The entire states of the federation have paid salaries. The present government gave one flimsy excuse or the other, using their favoured propaganda media to cook cat and mouse story about salary when they’re still the signatories,” Fintiri lamented, assuring that it would eventually be a thing of the past.

Fintiri tasked the people of the state to pray wholeheartedly in the remaining days for a peaceful transition of government and for the success of the incoming administration.

In their separate remarks, the PDP State Chairman Barrister Tahir Shehu and the State Secretary Alhaji Abdullahi Pirambe, urged the people of Adamawa to be patient with the incoming administration, because it would face myriad of challenges inherent in the inherited rot.