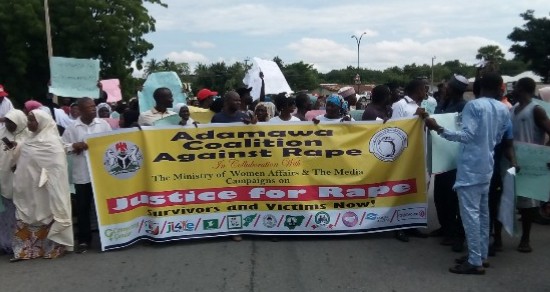 The long awaited judgement against a phedophile was what attracted the civil society organisations, the women groups and the media Tuesday, to Yola Upper Area Court III, Adamawa state, northeast Nigeria.

It could have been the first case to be heard, the first judgement to be passed yesterday. Little the groups in solidarity with the case, did know that they would be disappointed while patiently waiting for the case to be called for final judgement.

All the cases scheduled for Tuesday were heard, except that which the concern people of Adamawa, were patiently waiting for a prayer well answered, against rape for rituals or for whatever deviation with another case.

The presiding judge Umar Isa, having treated all the cases presented to him, was set to call it a day, when some prosecutors approached him with the complainants that their cases were not entertained.

The presiding Judge appeared to be surprised. There was no case file left untreated on his table. He could have requested for the case register. Though there were the cases to be entertained, the case files have however disappeared.

What could have swallowed it, reptiles or roddents? Could it be simply flushed away by early morning breeze? Could the case files be under abduction for ransom or simply swept under carpet following gracious gratification?

The presiding judge, would have passed judgement in the case of a rape of five-year-old girl yesterday. However the case file was among the two reported missing. A human right activists revealed.

The rape case was filed by the police against one Aliyu Mohammed, a 25-year-old single, a commercial tricyclist studying criminology at the college of legal studies, Yola, who allegedly raped a five-year-old girl in Galadima Ward of Yola South Local Government Area.

The court clerk who was sent, returned with a frustrating story that he could not trace the file, as the court registrar who could help, was equally absent.

Aliyu the alleged rapist, happy with the development, was seen in the court, ridiculously pointing at the gentlemen of the press, the CSOs, the human right and women groups, to his company, saying that the groups in solidarity against his alleged act, would all be disappointed.

The court judge, to the dismay of the different groups in unity against rape and injustice, eventually helplessly, rescheduled the judgement to January 14, 2020.

Judiciary is said to be the last hope of the common man. Are the common men at home with the seeming disappointing act alleged to be aimed at shortchanging the downtrodden?

Some CSOs and women groups who were in the court for the judgement expressed dismay over the development.

Some of the women the Periscope interviewed, suspected a fault play, a judicial complecency to the growing increase of rape cases, especially, as it affected the helpless neonates; frustrating proceedings, denying by delaying justice.

“The other time it was shifted to 5th Dec 17 because of NBA Week and today the file is nowhere to be found only again to be shifted to 14 January. Can the case file be recovered before the appointed date?

“Aliyu the alleged phedophile, has since been on bail. This is the second time the judgement will be adjourned for unfathomable reason. The rapist has been aggressively bragging rather proudly, that they have the law in their hands as much as they have money in their pockets.

“He said that any criminal, not necessarily rapist, could secure his freedom before the law, provided that he has money and backups. We thought he was joking. What happens today, is giving us a rethink,” The women would say.

“We are here full of hope that our quest for justice for a survivor of rape is here at last, only to get this shock,” Nuwama Ishaku, the Human Right Desk Officer of Centre for Women and Adolescent Empowerment, Yola, said.

Farah James, a member of Adamawa Coalition Against Rape ACAR, also expressed dismay over the unbelievably, not to be thought of incident.

“Can this be a judicial conspiracy to subvert justice in favour of the rapist? How can a case file get missing on judgement day, where not even a rat can have access to? Farah would expostulate.

Farah said that ACAR would meet over the matter to take a position.

The media mediators, especially those with an investigative house style, considered the insident as another kind of David Yallop’s investigative story to be treated in God’s name.

Breaking: Senate approves the conversion of MAUTech to a conventional university